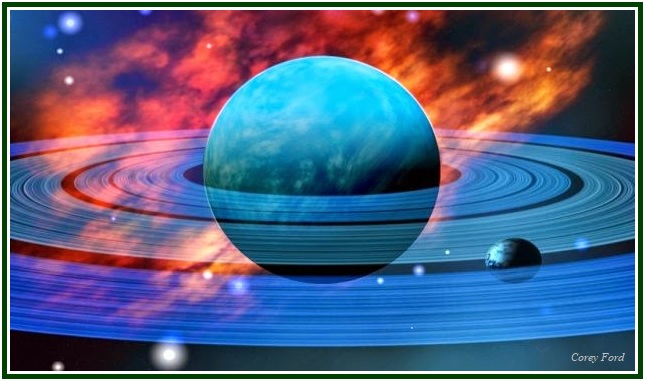 An image of Neptune, the main ruler of Pisces, with its rings and one of its Moons
Each time the Sun is in the sign of Pisces the sky stimulates in everyone’s heart a feeling of universal friendship. It is the right occasion to experience an unlimited unity with the cosmos. The annual lesson of transcendence starts in February and culminates in the second half of March.
During this period the energy of the local star fosters the strengthening of our communion with infinite space and eternal duration. After that, the commander of the solar system will join Aries, the first sign of the zodiac, and begin once more the heroic journey of the soul through the twelve signs.
Pisces is ruled by Neptune and its co-ruler is Jupiter. The generous self-forgetfulness experienced with the Sun in Pisces is the noble foundation for a truly pioneer action when the Sun crosses into the sign of Aries. The basic lesson of primordial unity must inspire the innovative will of the Aryan Sun, which starts from 20 March.
When we calmly think of the Cosmos, a feeling of peace comes to us and becomes a part of our soul for some time. The intensity and durability of this harmonious perception depend on the depth of the thought. Such a peace is often subconscious.
According to Raja Yoga, human mind slowly adopts the form and the substance of that which it contemplates. As we think of the cosmos, our unity with it expands. Theosophy helps us to do that while preserving a practical view of life. We can be one with the entire universe and still preserve our human condition.
The Equilibrium in Each Soul
The cosmos unfolds in symmetrical lines of evolution. The universal wisdom of Pisces flows better side by side with discernment. The mystic transcendence must be protected by good sense. In the eternal debate occurring in the sky, balance is granted by the dialogue of Pisces with its opposite zodiacal sign, the planning, meticulous and down-to-earth Virgo.
The mutual learning between Pisces and Virgo unfolds within each human soul. It takes place as the interaction of the part and the whole. It occurs as a discussion between the detail and the totality. There is an often uneasy debate: that of unfathomable infinity with the passing events of everyday life.
Both standpoints are needed. The inclusive view of Pisces is strong when it is helped by an accurate perception of details, given by Virgo. The Virgo spirit, with its critical view, its planning capacity and tireless work, is more effective whenever it evolves in harmony with the pervading communion shown by Pisces.
The concrete mind needs the broad view given by the deeper sky. The cosmic vision must be helped by that specific form of awareness which can see small things in a clear light and can put them in harmony with the unlimited. The feeling of respect for details makes it easier for the oceanic consciousness of Pisces to prepare the creative and incisive world of Aries.
On the other hand, the idea of voluntary simplicity opens the door to the search for the celestial treasure. In order to be aware of life’s totality, detachment is a decisive factor. The idea of a simple life is more than a concept in Economics and a sociological need. It is also a virtue of the soul and a central principle of the Piscean universe.
A heart that is free from confusion lives above those narrow feelings whose main characteristic is complete uselessness. A simple life flows in harmony with the higher self and makes it easier to reach divine knowledge.
In ancient and modern theosophy, the universe is seen as an Ocean.
Renunciation regarding things of secondary importance liberates the pilgrim from meanness and enables him to find that which is essential in the shoreless sea of life.
A Friend From the Sky
Neptune is the lord of the endless waters in Mythology, and one of the most cosmic planets of our solar system. Located far away from the Sun, it is considered a friendly representative from the Galaxy, accompanying the sacred journey of our solar village through the wider sky.
One reason for using the metaphor of an “unlimited ocean” regarding the universe is in the fact that the cosmos has its own tides and its “oceanic” currents, with their cycles, just as the watery oceans of our planet.
Astrological science is vehemently defended by Helena Blavatsky in the volume XIV of her Collected Writings and elsewhere. The Psychology of the Sky studies the tides of the universe as seen from the ground of the Earth, revealing the broad influence of celestial forces over each aspect of mankind. It demonstrates our personal identity with the spiritual life of the small cosmic village of which we are part. By showing the pilgrim the unity of all life, Neptune and Pisces introduce him to the active side of universal compassion.
000
The above article incorporates the contents of the notes published anonymously in the February 2017 edition of “The Aquarian Theosophist”, pp. 1-3.
000
Click to see other articles on the divine intelligences in the sky: “Neptune, a Mystery In Front of Us”, “The Healing Power of Universality”, “The Bright Side of Saturn”, “The Light and Power of Jupiter”, “A Few Words on Uranus”, “The History of a Planet: Venus”, “The Full Moon of May”, “The Sun and the Moon in One’s Soul”, “The Magic of the Moon”, “Our Week and the Solar System”, “All Life Is Good”, “Pluto: A Struggle of Two Thousand Years”, “The Law of Correspondences” and “The Sacred Dimension of Space”.
000
Regarding the planet Mars, click and read the poem “The Light of Stars”, by Henry Wadsworth Longfellow.
000
On 14 September 2016, after examining the state of the esoteric movement worldwide, a group of students decided to found the Independent Lodge of Theosophists. Two of the priorities adopted by the ILT are learning from the past and building a better future.
000