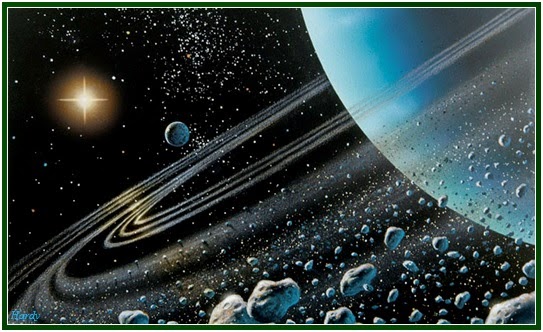 Uranus and its rings, or “crown of smaller wheels” as the ancients said
The mysterious planet Uranus is a “bridge-builder” between our solar system and the Milky Way. Like his companions Neptune and Pluto, this rather distant “wanderer” is considered an ambassador from the galaxy.
Together with the more severe master Saturn, Uranus is the co-regent of Aquarius sign and age. It is also a source of inspiration for visionary and creative energies.
Associated to sudden change and to the enlightenment of consciousness, Uranus the “Aquarian” was discovered by modern science in March 13, 1781. It was secretly known to wise men of previous ages, and H.P. Blavatsky wrote:
“We may, and shall be told, no doubt, that Uranus was unknown to the ancients, and that they were forced to reckon the sun amongst the planets as their chief. How does anyone know? Uranus is a modern name; but one thing is certain: the ancients had a planet, ‘a mystery planet’, that they never named and that the higher Astronomus, the Hierophant, alone could ‘confabulate with’. But this seventh planet was not the sun, but the hidden Divine Hierophant, who was said to have a crown, and to embrace within its wheel ‘seventy-seven smaller wheels’.”[1]
Indeed, Uranus has a number of small objects forming rings around itself.
H.P.B. also said in her book The Secret Doctrine that the “seventh planet” of ancient Hindu wisdom is the same celestial body now called Uranus, and whose exoteric representative is the Sun. She quotes J.-M. Ragon, according to whom the seventh day of the week should be dedicated to Uranus, not to the Sun. It is said it would be better to have it called “Uranday”, instead of “Sunday”. [2]
Uranus relates to the future, and to pioneer action. Its energies directly inspire the modern theosophical movement, whose first object is typically Aquarian. The movement works to produce a better understanding of the law of universal friendship among all beings. Such a law includes other Aquarian topics, such as mutual respect, diversity, contrast, and self-responsibility. “Live and let live” is one of the mottos of both the Aquarian age and the theosophical movement.
Occultism or Divine Wisdom is waiting for our mankind. It is ready for us now, and H. P. B. shared with the following words a glimpse of the Aquarian victory in the present century:
“…Whether by phenomenon or miracle, by spirit-hook or bishop’s crook, Occultism must win the day, before the present era reaches ‘Sani’s (Saturn’s) triple septenary’ of the Western Cycle in Europe, in other words – before the end of the twenty-first century ‘A.D.’.” [3]
Every portion of real wisdom implies a corresponding burden of ethical duty.
Each sincere esotericist and student of theosophy has therefore a personal responsibility regarding the victory of universal brotherhood in the next decades, which is in direct proportion to his or her actual knowledge of the facts involved, and of their practical implications for citizens of goodwill.
NOTES:
[1] “Collected Writings”, H.P. Blavatsky, TPH, volume XIV, p. 332.
[2] See pp. 99-100, volume I, in “The Secret Doctrine”, by H. P. Blavatsky. Yet at volume I, p. 575, more data show the complexity of the relation between Uranus and the Earth.
[3] “Collected Writings”, H.P. Blavatsky, TPH, volume XIV, p. 27.
000
An initial version of the above text was published at “The Aquarian Theosophist”, March 2012 edition, with no indication as to the name of the author.
000
On the role of the esoteric movement in the ethical awakening of mankind during the 21st century, see the book “The Fire and Light of Theosophical Literature”, by Carlos Cardoso Aveline.