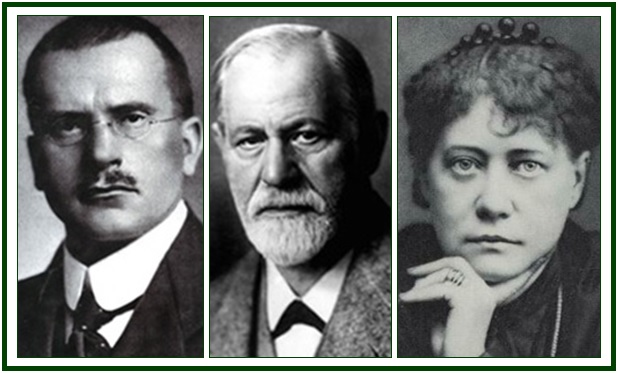 Carl G. Jung, Sigmund Freud and Helena P. Blavatsky
1. The So-Called “Unconscious” Does Not Exist
Carl Gustav Jung writes about the “unconscious” and the “collective unconscious”. What does the esoteric philosophy say about that?
It’s simple: precisely because universal consciousness is universal, it has no limits and could not have them. Therefore there is nothing unconscious in the universe, although there are “subconscious” and “supraconscious” levels of consciousness.
Click Here to Read
A Report on Jung and Theosophy
000
“A Report on Jung and Theosophy” was published in the associated websites on 23 August 2021. It consists of  a translation, made by the author, of his Portuguese language text “Informe Sobre Jung e a Teosofia”.
000
Read more:
* “Jung Writes Against Theosophy”.
* “The Whole Nature is Conscious”.
* “Theosophy and the Bardo Thodol”.
* “Tibetan Book of the Dead Is Ningma”.
* “Freud, Jung, And Ethics”.
* “Paracelsus and the Book of Nature”.
000
See in the associated websites the two-volume compilation “The Hermetic and Alchemical Writings of Paracelsus”: Volume I  and Volume II.
000