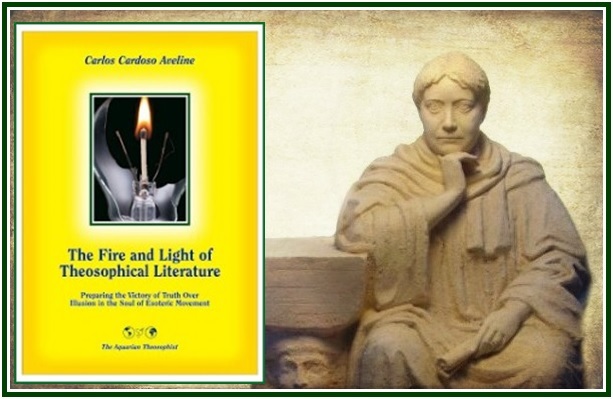 The front cover of “The Fire” and a statue of Helena
P. Blavatsky, made by Ukrainian artist Alexey Leonov
When I first read the book “The Fire and Light of Theosophical Literature”, I knew little of the Theosophical Movement, apart from vague references to the Theosophical Society and Helena Blavatsky in articles and publications within New Age circles.
My aim with this piece is to illustrate the role of this book within the wider Theosophical Movement, explaining my own process of understanding, which led me from being a mere dilettante, someone curious about the Occult, to commit myself to contribute to the Movement.
There have been plenty of misunderstandings regarding Theosophy. “The Fire and Light” early sets the tone in its first pages, when it quotes from Robert Crosbie’s “The Friendly Philosopher”:
“It is the duty of esoteric students to unmask error and hypocrisy; to face lie with truth; not as personal criticisms but as facts against mis-statements. (…) The custodians of Truth voice it in the face of lie, ignorance and error (…). Theosophy is in the world for that purpose.” (page 14) [1]
The first part of the book examines the premises and general context of the active, current conflict between wisdom and dead letter in the human mind and the esoteric movement. It is by understanding this context that we can grasp the level of collective deceit that Mankind has been and is being subject to, and set the bases, in the present moment, to an ethical future.
The second part analyses how mistakes and fraud were actively articulated, and how the movement has been getting rid of these illusions. The third part looks ahead at the future, showing the duty of the movement to help humanity take steps to a new civilization based upon Ethics.
As a newcomer to the Theosophical Movement I had to come to terms with the purpose that the Theosophical Society was set to achieve and how the initial plan as outlined by the founders of the Movement was gradually deviated from its course.
The first period in the history of the movement, between the founding of the T.S. in 1875 to H.P.B.’s passing in 1891 was highly influenced and blessed by great Initiates from around the world. During the second period, probationary, the movement deviated from the initial focus and aspects, and a Jesuitical ritualism took over. Here names such as Annie Besant and Charles Leadbeater appear in the Krishnamurti affair (Chapters 15, 16) as well as the “channellings” and “visions” of life on Mars (Chapters 13, 14). The third period, once the probationary process is overcome, should correspond to the healthy development of universal brotherhood. (see pages 35-36)
It is to this third historical period that the final chapters of the book point at, starting with a thought- provoking chapter on “The Embellishment of Truth”:
“Whenever a group or section of the theosophical movement starts embellishing truth so that it gets more attractive to the world and to the people at large, there is danger. Truths which appear to be ugly may be swept aside. Those who insist in raising uncomfortable facts will be considered dangerous people. Credulity will come in and people will forget these classical words of a Mahatma: ‘Credulity breeds credulity and ends in hypocrisy.’ ” (p. 181)
Perhaps the above paragraph sums up well the clear intention of “The Fire and Light”, which is not about “pointing fingers” and discriminating between “good and bad theosophists”, but rather – by analysing mistakes done in the past – about building better foundations for the future of the Movement. The Movement needs renewal, and little by little the Vatican-like structures and ritualistic approaches are disappearing.
The best way of showing how the book helps us to look at the future with optimism is to quote this passage from H.P. Blavatsky’s “Collected writings”:
“If Theosophy prevailing in the struggle, its all-embracing philosophy strikes deep root into the minds and hearts of men, if its doctrines of Reincarnation and Karma, in other words, of Hope and Responsibility, find a home in the lives of the new generations, then, indeed, will dawn the day of joy and gladness for all who now suffer and are outcast. For real Theosophy is ALTRUISM, and (…) brotherly love, mutual help, unswerving devotion to Truth. If once men do but realize that in these alone can true happiness be found, and never in wealth, possessions, or any selfish gratification, then the dark clouds will roll away, and a new humanity will be born upon earth.” (page 253)
It seems clear from “The Fire” that it was statements as the above from HPB that paved the way to the future of the Theosophical Movement, rather than the developments in the Adyar Society; and that any effort in revitalising the Movement must come from within each of its members, following the clear and original teachings of HPB, without any attachments to bureaucratic institutions.
NOTE:
[1] All pages indicated in this article refer to the book “The Fire and Light of Theosophical Literature”, Carlos Cardoso Aveline, The Aquarian Theosophist, Aveiro, Portugal, 2013, 255 pp.
000
Born in Spain, Juan Pedro Bercial is an associate of the Independent Lodge of Theosophists. MSc in Pure Mathematics (Geometry), PhD (Materials Science), he has researched and published in the fields of Singularity Theory and Fracture Mechanics at the University of Liverpool (UK). He currently teaches Mathematics at a College in the North West of England.
000
See in our websites the articles “The Making of ‘The Fire and Light’”, “The HPB Defense Project – 2016”, “A Timely Book for the New Age” (by Robert Kitto), “How to Obtain The Fire and Light” and “Buy ‘The Fire and Light’ Now”.
000
On 14 September 2016, after examining the state of the esoteric movement worldwide, a group of students decided to found the Independent Lodge of Theosophists. Two of the priorities adopted by the ILT are learning from the past and building a better future.
000