In Life as in the Theosophical
Movement, All is Not Easy to Understand
The Editors of The Aquarian

The making of the book “The Fire and Light of Theosophical Literature” took long years, since its project began in 2005, and readers have asked the editors of “The Aquarian Theosophist”:
“Why did The Theosophy Company (Los Angeles) not actively support the publishing of the volume, which defends the truth about Helena Blavatsky? [1] After all, it is everyone’s duty to defend a teacher of divine knowledge who is unjustly attacked, and we know that individuals of the Theosophy Company accompanied the preparation of the book.”
As a matter of fact, in life and in the theosophical movement, all is not easy to understand.
One must take into consideration that Sylvia Cranston’s  extraordinary  biography of Helena Blavatsky [2] also got published in an independent way in the 1990s, although Sylvia Cranston was a lifelong associate of the United Lodge of Theosophists, whose ideals the Theosophy Co. exists to serve.
Jerome Anticipates the Future
Jerome Wheeler, the founding editor of “The Aquarian”, clearly foresaw the reasons to publish in an independent way the book in defence of H.P.B. and her teachings.  Eight years before the publication of “The Fire and Light”, which exposes the slanders against HPB, Jerome wrote to Carlos Cardoso Aveline and anticipated the need for self-sacrifice and firm determination.
Referring to the future volume, he said on 7 June 2005: 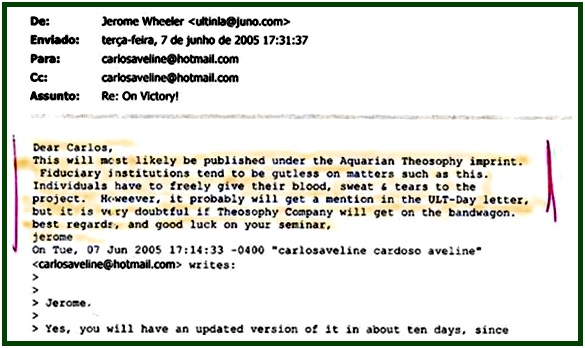