The Fire and Light of Theosophical Literature
Robert Kitto 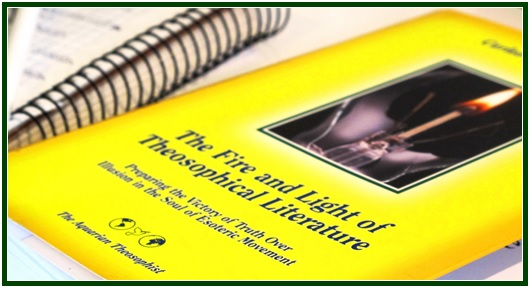 Discrimination is often considered to be the first quality of the spiritual life. Ultimately this manifests as the awareness able to distinguish the Real from the Unreal but in the early stages of the spiritual quest we must develop sufficient skills to separate truth from fabrication.
There are more paths of error than we may first realise and contemporary spirituality is rich with embellishments ranging from pointless frippery to the downright false.
Carlos Cardoso Aveline’s “The Fire and the Light of Theosophical Literature” (The Aquarian, 2013) is a timely book for the New Age. A passionate argument is made for the principles of Truth, and in particular for the Universal Principles enshrined in Theosophy as presented by the founders of the modern Theosophical movement.
It is a necessary and searing critique of the numerous ego-mongers who “reformulated” these eternal truths; and regrettably continue to do so.  Aveline, with his refreshingly plainly spoken style, pulls no punches in this succinct, clearly laid out and accessible criticism of later inauthentic and erroneous embellishments.
This is an important book for Theosophists and lovers of truth trying to separate the wheat from the chaff in Theosophy.
000
Robert Kitto is a long standing member of the Theosophical Society (Adyar) in the United Kingdom. He was a Lodge President and in 2002 became a Trustee of The Blavatsky Trust.
The above note was first published in the August 2014 edition of “The Aquarian Theosophist”.
000
See here the 1m30s video “The Healing Chain Reaction”, with a fragment from “The Fire and Light”:
000