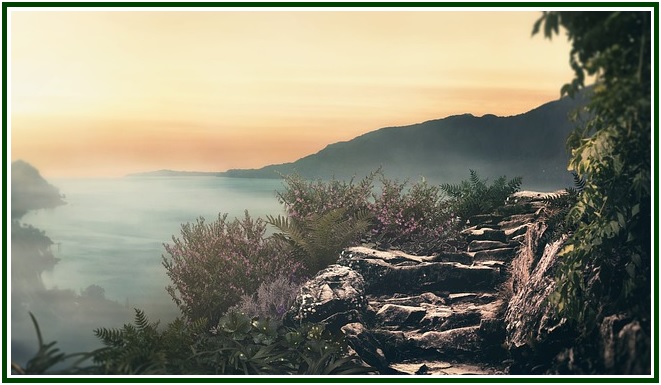 In its inner dimension, the path to wisdom is a ladder to sky.
Each step taken transforms the pilgrim: the truth-seeker undergoes a transfiguration. As he walks through time and elevates his focus, he becomes a different being.
On each level of consciousness, a higher and more transparent substance replaces old stuff. His former self ceases to exist and is born again at the same time. This occurs in such a slow pace that he may not notice it.
Pain alternates with joy.
In the inner, vertical aspect of his pilgrimage, he must give up all attachment to “personal” things, both nice and unpleasant. He must live the truth present in the first sentence of chapter 15 in the Dhammapada:
“Let us, then, free from hate, live happily among those who hate; among men who hate, let us dwell free from hate.”
The path of the pilgrim and the logic of his actions, are given by his own antahkarana, his individual “Jacob’s ladder”. His outward presence in the world is but the shadow of his inner travel from the valley to the mountain, and from the narrow to the wide. The immortal side of his soul shows to him the celestial aspects of all things and beings.
The Uphill Path
Any search for a direct knowledge of the higher levels of consciousness must take place in individual terms, since the geography of the soul or the structure of consciousness and Karma changes radically from one person to another.
Philosophical approaches and the experience of others are useful as sources of inspiration and examples to be followed. Yet the understanding must be one’s own. Right decisions can only result from an independent view, as mere imitations are worse than useless and thinking by oneself is unavoidable.
There are no traffic lights and road signs in the transition among states of consciousness. Each student must accumulate his own experience during the process of self-observation. Yet he will find friends along the path, and many of them do not live in his own century. Francis Hutcheson (1694-1746), for instance, made a helpful description of the higher senses of human soul. He used ethics and good will as the criteria of truth: if someone understands transcendent Reality, his ethics and moral sense will show that. [1]
A classical approach is available in an article by Damodar Mavalankar [2]. The conscious goal, says Damodar, is to raise the whole of one’s relation to life, meditating 24 hours a day while one’s normal existence goes on and everyday tasks are performed.
Once the learner understands the different levels and principles of human consciousness, he starts observing which habits and actions elevate his view of the world and of himself.  He comes to identify the factors that take his attention away from truth. He sees many more things than he previously saw, and pays a price for that: detachment and emotional purification are necessary. He may find it useful to write down the daily record of his efforts.
The factors identified as useful to the upward pilgrimage are stimulated in firm or smooth terms, according to circumstances. Detrimental factors are gradually confronted and left aside. This is seldom easy.
The challenges vary.
There are no magic formulas valid for all occasions. Life does not give the pilgrim necessarily that which he wishes. It offers him what he needs in order to learn and to go ahead in evolution. While abandoning false lights, the pilgrim saves time by obeying his own sense of moral duty.
NOTES:
[1] An approach to Hutcheson’s writings from a theosophical perspective is available in his article “The Constitution of Human Nature” and in the editorial note to it.
[2] See the article “Contemplation”. Read “Antahkarana, the Bridge to Sky”. A careful contemplative study or second-reading of the first part of “The Secret Doctrine”, volume I, is recommended.
000
An initial version of the above article is part of the February 2018 edition of “The Aquarian Theosophist”, pages 5-6, under the title “The Vertical Side of a Pilgrimage”.  The name of the author is not indicated in that first version. The text was published as an independent item at the associated websites on 05 January 2021.
000