Both Deep Meditation and the Fate of
One’s Incarnation Depend on Antahkarana
Geoffrey A. Farthing 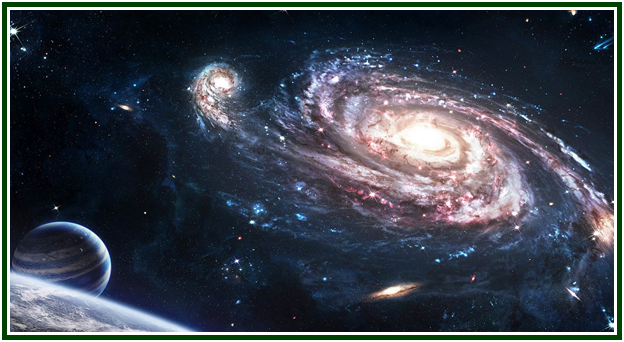 0000000000000000000000000000000000000000000
A 2017 Editorial Note:
The following text was first published at
“The Theosophist”, Adyar, India, in August 2004.
We thank The Blavatsky Trust and its Trustee
Robert Kitto for kindly sending us “The Turiya
State” for publication in our associated websites.
(The Editors)
000000000000000000000000000000000000000000000000
In various works on the subject of meditation, four states of consciousness are mentioned: the waking, the dreaming, the dreamless sleep and the Turiya. For the average meditator, the first two – the normal state of awareness when we are awake, and the dreaming state – are not too difficult to comprehend because they are common experience.
Many, however, feel unable to understand dreamless sleep, as this seems to be total unconsciousness, and can only try to imagine what the Turiya or fourth state is like. Nevertheless, many meditators will be able to appreciate there is a transcendental state when the activities of the lower mind are quietened and consciousness, whilst being retained, becomes pure subjectivity, i.e., there are no objects of consciousness for it to be aware of.
It might therefore be of interest to the aspiring student who endeavours to practise meditation seriously to know what H.P. Blavatsky has said regarding the Turiya state.
This information is in the Esoteric Section (ES) Instruction No. 5 in Collected Writings, vol. XII, pp. 710-711. First there is a diagram showing rays emanating from the combination of Parabrahman and Mulaprakriti. Parabrahman is the dynamic aspect of the universe. Mulaprakriti is the abstract root of matter existing before manifestation, when it becomes Prakriti. Together these two form the root of existence from which consciousness at our level of being can arise. 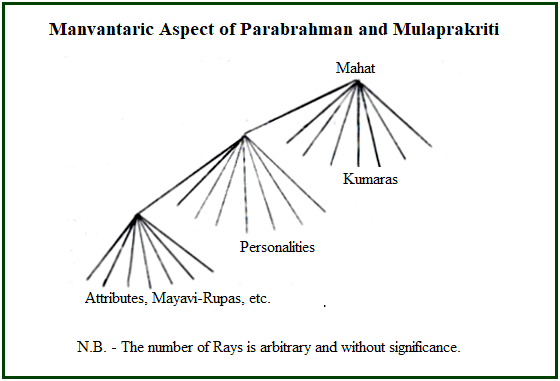 The diagram shows that the first manifestation of this supreme dichotomy is the root of mind, sometimes referred to as Universal Mind or Mahat. This descends into three kinds of composite rays which are labelled Kumaras, Personalities and Attributes, i.e., Mayavi Rupas, etc. The diagram shows that for each of these there are seven rays, but notes also that the number of rays is arbitrary and without significance.
Then follows the magnificent teaching, given in full below:
“When the Ray is thus shot forth, it clothes itself in the highest degree of the Astral Light, and is then ready for incarnation; it has been spoken of at this stage as the Chhaya, or shadow, of the Higher Mind, as indeed it is. This clothing of itself in a lower form of Matter is necessary for action in the Body; for as an emanation of the Higher Manas and of the same nature, it cannot, in that nature, make any impression on this plane nor receive any. An archangel, having no experience, would be senseless on this plane, and could neither give nor receive impressions. Hence the Lower Manas clothes itself with the essence of the Astral Light, and the Astral Envelope shuts it out from its Parent, except through the Antahkarana. The Antahkarana is therefore that portion of the Lower Manas which is one with the Higher, the essence, that which retains its purity; on it are impressed all good and noble aspirations, and in it are the upward energies of the Lower Manas, the energies and tendencies which become its Devachanic experiences. The whole fate of an incarnation depends on whether this pure essence, Antahkarana, can restrain the Kama-Manas or not. It is the only salvation. Break this and you become an animal.”
“But while the inner essence of the higher Ego is unsoilable, that part of it which may be spoken of as its outer garment, the portion of the Ray which takes up Astral Matter, may be soiled. This portion of it forms the downward energies of the Lower Manas, and these go towards Kama, and this portion may, during life, so crystallize itself and become one with Kama, that it will remain assimilated with Matter.”
“Thus the Lower Manas, taken as a whole, is, in each Earth-Life, what it makes itself. It is possible for it to act differently on different occasions, although surrounded each time by similar conditions, for it has Reason and self-conscious knowledge of Right and Wrong, of Good and Evil, given to it. It is, in fact, endowed with all the attributes of the Divine Soul, and one of these attributes is Will. In this the Ray is the Higher Manas. The part of the Essence is the Essence, but while it is out of itself, so to say, it can get soiled and polluted, as above explained. So also it can emanate itself, as said above, and can pass its essence into several vehicles, e.g., the Mayavi-Rupa, the Kama-Rupa, etc., and even into Elementals, which it is able to ensoul, as the Rosicrucians taught.”
“This unity of Essence with its Divine Parent renders possible its absorption into its source, both during Earth-Life and during the Devachanic interval.”
“There comes a moment, in the highest meditation, when the Lower Manas is withdrawn into the Triad, which thus becomes the Quaternary, the Tetraktys of Pythagoras, the highest, the most sacred, of all symbols. This upward withdrawal of the Lower Manas leaves what was the Quaternary as a Lower Triad, which is then reversed. The Upper Triad is reflected in the Lower Manas. The Higher Manas cannot reflect itself, but when the Green [Lower Manas] passes upward it becomes a mirror for the Higher; it is then no more Green, having passed from its associations. The Psyche, thus separated from Kama, unites itself with the Higher Triad and becomes spiritual; the Triad is reflected in the Fourth, and the Tetraktys is formed. So long as you are not dead, there must be something in which the Higher Triad is to be reflected; for there must be something to bring back to the waking consciousness the experiences passed through on the higher plane. The Lower Manas is a tablet, which retains the impressions made upon it during trance; thus serving as a carrier between the Higher Manas and the everyday Consciousness. This withdrawal of the Lower Manas from the Lower Quaternary, and the formation of the Tetraktys, is the Turiya state; it is entered on the Fourth Path, and is described in a note to the The Voice of the Silence as a state of high spiritual consciousness, beyond the dreamless state.” [Collected Writings, H. P. Blavatsky, TPH, Volume XII, pp. 710-711]
Note that in the last paragraph the colour green is referred to. This is the colour of the lower mind, illustrated first in the colour plate opposite p. 580 of Instruction 3 and referred to again in Diagram V opposite p. 569. This helps us to understand at least the rationale of deep meditation when the Turiya state is achieved.
000