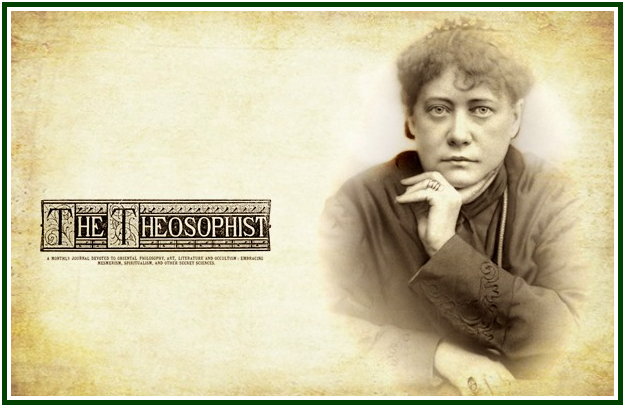 Helena P. Blavatsky (1831-1891) founded “The
Theosophist” in 1879 and edited it for a few years
A 2017 Editorial Note:
The fact is well-documented in “The Mahatma Letters” that the Masters themselves – and several of their direct disciples – helped in various ways the editorial work of “The Theosophist”, as long as the journal was edited by Helena P. Blavatsky.
This ceased to occur during the fifth year of the magazine, published between October 1883 and September 1884.
HPB stopped working directly as its editor the moment she left India for Europe on February 20, 1884. However, her pupil and co-worker Damodar Mavalankar remained active in Adyar and helped editing the magazine for about one year more. [1]
The founder of the magazine did return to Adyar in December 1884, but soon became gravely ill and had to leave India for good in February 1885. Damodar left India about the same time.
One may say therefore that as volume VI of the magazine was being published (between October 1884 and September 1885) HPB was scarcely present in the daily editorial work. On the other hand, her approach to theosophy was still influential in the magazine as long as Damodar was around, in the first half of the volume.
In the February 1885 edition (see page 117), there is this “NOTICE”:
“In future all literary communications must be addressed to Mr. A. J. Cooper-Oakley, the managing editor, Theosophist Office, Adyar, Madras.”
From that moment on HPB cannot be considered the editor of the magazine except in a very abstract sense of the word.
(Carlos Cardoso Aveline)
Click here to see The Theosophist,
volume VI, India, 1884-1885, in PDF
ENDNOTE:
[1] On the fact that she had little direct influence over such tasks, see for instance p. 52, December 1884 edition, p. 52, left side column, upper part.
000
Readers are invited to see the article “Journals According to the Mahatmas”. The text is part of the 2013 book “The Fire and Light of Theosophical Literature”, by Carlos Cardoso Aveline.
000
On 14 September 2016, after examining the state of the esoteric movement worldwide, a group of students decided to found the Independent Lodge of Theosophists. Two of the priorities adopted by the ILT are learning from the past and building a better future.
000
On the role of the esoteric movement in the ethical awakening of mankind during the 21st century, see the book “The Fire and Light of Theosophical Literature”, by Carlos Cardoso Aveline.