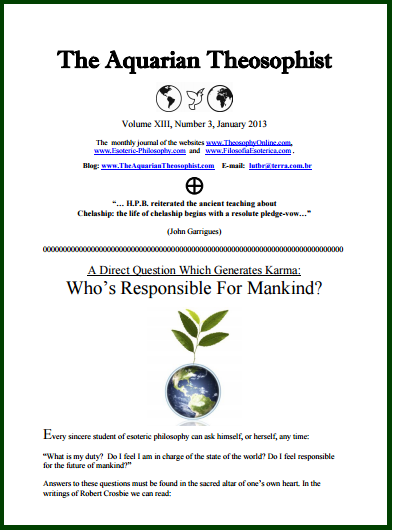 On page 1 of the present edition, Joaquim Soares asks himself who is actually responsible for the future of mankind. Is it true that such a duty belongs to everyone?
On page 3, the H. P. Blavatsky Defense Project presents Dr. John Algeo and his committee of editorial advisers at the U.S.A. TPH with a chance to redeem themselves, from an ethical point of view.
On page 4, a report from Rome reveals Adyar  theosophists in Italy are getting active in the process of defending H.P.B. against her slanderers, old and new.
On pages 6 and 7, several texts are recommended on the center of the aura of the theosophical movement. One of the articles is entitled “A Masterpiece of Editorial Forgery”.
A short note entitled “The Symmetry of Life” will be found on page 7: true happiness is in fact above the pendulum like oscillation between pain and pleasure.
From Philadelphia, in the United States, Steven H. Levy, M.D., writes on “Getting a Handle on the Boundless”.
An article of decisive importance – “The Meaning of a Pledge” – starts on page 9. It examines the life and discipline of those who choose to be conscious aspirants to lay discipleship and esoteric wisdom. Its author is “One Who is Pledged”.
On pages 13-14, one sees news from friends in Mexico, Australia and Greece. A Master of the Wisdom examines the need for independence, in a fragment published on pp. 14-15.  The January edition closes with “The Secret of Self-Enlightenment”.
Click here to see the January 2013
edition of “The Aquarian Theosophist”
000
You can find the entire collection of “The Aquarian Theosophist” in our associated websites.
000
On the role of the esoteric movement in the ethical awakening of mankind during the 21st century, see the book “The Fire and Light of Theosophical Literature”, by Carlos Cardoso Aveline.