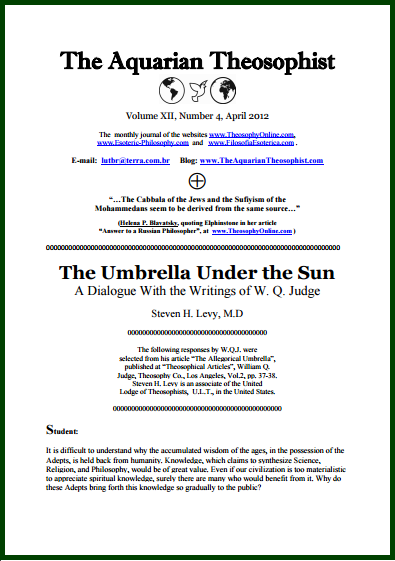 April edition opens with a dialogue across the ocean of time between ULT associate Steven Levy and William Q. Judge – through Judge’s writings.   It goes on with a 1885 theosophical collection of Jewish Aphorisms, and a Sufi tale written down by Hazrat Inayat Khan.
Dr. N. C. Ramanujachary, the vice-president of the Adyar Society in India, examines the first letters from a Mahatma to A. P. Sinnett. John Garrigues discusses how to read “Between the Lines” while studying the theosophical classics. The edition reports on the 2012 European School of Theosophy, in the Netherlands, and discusses the right relationship between Masonry and the Theosophical Movement.
Click here to see the April 2012
edition of “The Aquarian Theosophist”
000
You can find the entire collection of “The Aquarian Theosophist” in our associated websites.
000
On the role of the esoteric movement in the ethical awakening of mankind during the 21st century, see the book “The Fire and Light of Theosophical Literature”, by Carlos Cardoso Aveline.