Every State and Nation Deserves Our Respect
Carlos Cardoso Aveline 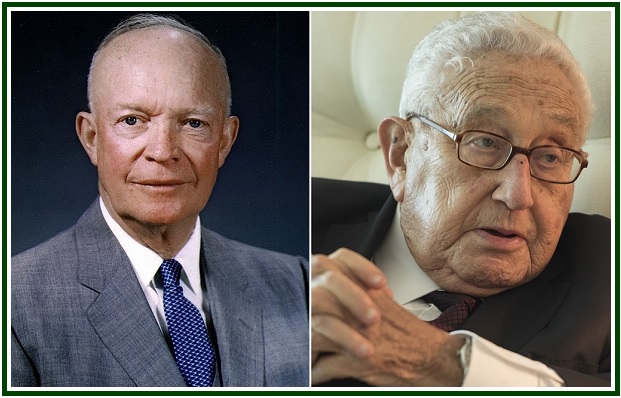 Dwight Eisenhower and Henry Kissinger
Good will and common sense – always potentially present in human hearts – will help us overcome quite a few obstacles in the first half of 21st century.
Let us see one example.
It seems the main weapons’ industries in the USA include among their priorities the notion of maintaining a dangerous level of tension in the relation between Russia and the West. Thus they have a pretext that justifies the spending of a fortune every year in the actual preparation for atomic war and other forms of world conflict.
They conveniently make believe they do not know that such a type of war is not doable any longer, and not even conceivable, due to the iron principle of Mutual Assured Destruction (MAD): there can be no war between two nuclear powers.
Yet using Ukraine and Ukrainian people as a pawn in the global chessboard, in order to create a kind of “new Cold War” and justify their long-standing waste of public money, the US government bureaucracy pretends not to be acquainted with the sober warning of President Dwight Eisenhower. In his famous speech of 17 January 1961, Eisenhower kindly denounced the undue influence of the Military-Industrial Complex in political decisions.[1]
During the 1990s, the end of the Cold War was an opportunity for a new world peace based on the principle of self-determination of states. Henry Kissinger made a thorough study and analysis of the diplomatic history of the world, and defended in a number of books and essays the old principle of equilibrium and mutual respect among nations as the sound basis for cooperation and mutual help, instead of ill-will and war, cold or not. [2]
Russia has consistently made its case showing that its State deserves respect and will defend itself. [3]
In June 2021, the Kremlin published a long and thoughtful article by Vladimir Putin showing the history of Ukraine as part of Russian history, and the other way around. “Russians and Ukrainians are one people”, says Putin, and he carefully explains why he thinks thus. [4]
The balanced article by Putin invites every citizen around the world to think about the need to avoid irresponsible adventures in international politics, or in the global market of suicidal atomic weapons.
The modern theosophical movement has as its main object to build a nucleus of universal brotherhood. It says with the Dhammapada that hate will not be eliminated by hate: it must be healed by the sincere practice of good will and cooperation. The theosophical movement was prophetically founded in New York in 1875, seventy years before the fortunate establishment of the United Nations in the same city in 1945 – the year Nazism was militarily defeated. Seventy is a mystical number and seventy years a mystical cycle.
There is a spiritual reason behind the fact that the Theosophical project was set into motion under the leadership of Helena Blavatsky, a Russian lady, in the territory of the United States. It constitutes a healthy seed of friendship among the two nations. It is also a seed of planetary peace and mutual help now present in many places around the world.
In different centuries, Napoleon and Hitler decided to do all they could in order to defeat and destroy Russia as an independent state. The result of their political and military adventures is well-known to us all.  In our 21st century, we should learn to have respect for Russia, and for other states and nations as well.
We have only one planet and it is small.
It is only in a metaphoric sense that the clever lunatics who want to open the door to Cold War and nuclear proliferation – “because it is good for business”- can live in the Moon, or Luna, so to say. They, too, need the Earth as a place to live.
Mrs. Radha Burnier, the well-known theosophist, wrote a significant article on the need to choose between lunacy and lucidity.[5] The first half of our century is the time to decide we will follow the path of common sense and make a transition from MAD (Mutual Assured Destruction) to some form of Mutual Assured Help and Mutual Assured Safety. Western nuclear powers should be the first to show self-restraint and demonstrate they have a sense of ethics and responsibility. Regarding Iran and similar situations, their duty is to stop, not to stimulate, nuclear proliferation.
We need and we deserve to think constructively in the long term. Nuclear powers have the duty to bring peace, stability and moderation to the international chessboard.
World leaders should remember that planting trees, or sowing potatoes and tomatoes, is much better than making atomic weapons and speaking evil of adversaries. Properly raising children, seeking inner happiness and preserving the life of our planet are real priorities. We must silently cherish and have deep respect in our souls for the lives of all human beings – and act accordingly.
NOTES:
[1] Read about that and watch some of the crucial moments in Eisenhower’s speech. See the article “Dwight Eisenhower, On Peace”.
[2] Examine for instance his books “World Order” (Penguin Books, 2014) and “Diplomacy” (Simon & Schuster Paperbacks, copyright 1994).
[3] Read the article “Russia: The Putin Interviews”.
[4] Click to see the text by Vladimir Putin, “On the Historical Unity of Russians and Ukrainians”.
[5] Read her text “A Lunatic Race?”.
000
The article “Russia, Wisdom and World Peace” was first published in December 2021 at the theosophical blog in “The Times of Israel”. It is available at the associated websites since 24 January 2022.
000
Read more:
* Old Prophecies and Atomic War.
* A Burning Match Anticipates the New Day.
* Click and see other articles on Russia, Ukraine, Theosophy and Helena Blavatsky.
000