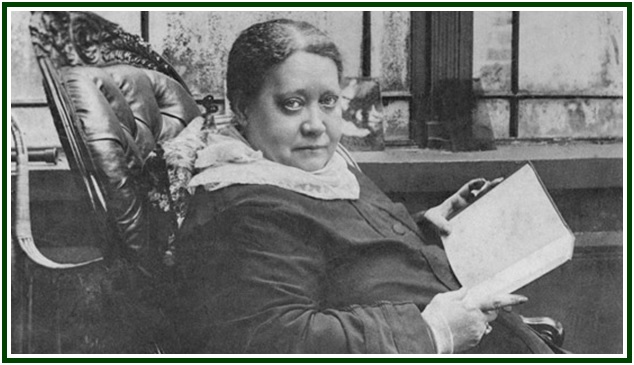 HPB in 1887
000000000000000000000000000000000
Editorial Note:
Political or institutional interests may
kidnap human beings’ natural desire to
search for truth and make one’s mind
“adapt” into that which is useful from the
point of view of attaining short term
personal goals.  That was not so with
HPB, as one can see by reading the
remarks selected and reproduced below.
(Carlos Cardoso Aveline)
00000000000000000000000000000000000000
To Show Anger
No “Cultured” man or woman will ever show anger in Society. To check and restrain every sign of annoyance shows good manners, certainly, but also considerable achievement in hypocrisy and dissimulation. There is an occult side to this rule of good breeding expressed in an Eastern proverb: “Trust not the face which never shows signs of anger, nor the dog that never barks.” Cold-blooded animals are the most venomous.
Non-resistance to Evil
To brag of it is to invite all evil-doers to sit upon you. To practise it openly is to lead people into the temptation of regarding you as a coward. Not to resist the evil you have never created nor merited, to eschew it yourself, and help others quietly to get out of its way, is the only wise course open to the lover of wisdom.
“Love Thy Neighbour”
When a parson has preached upon this subject, his pious congregation accepts it as tacit permission to slander and vilify their friends and acquaintances in neighbouring pews.
Brave as a Lion
The highest compliment – in appearance – paid to one’s courage; a comparison with a bad-smelling wild-beast – in reality. The recognition, also, of the superiority of animal over human bravery, considered as a virtue.
A Sheep
A weak, silly fellow, figuratively, an insulting, contemptuous epithet among laymen; but one quite flattering among churchmen, who apply it to “the people of God” and the members of their congregations, comparing them to sheep under the guidance of the lamb.
The Duel as a Point of Honour
The duel being an institution of Christendom and civilization, neither the old Spartans, nor yet the Greeks or Romans knew of it, as they were only uncivilized heathens. (See Schopenhauer.)
Forgive and Forget
“We should freely forgive, but forget rarely,” says Colton. “I will not be revenged, and this I owe to my enemy; but I will remember, and this I owe to myself.” This is real practical wisdom. It stands between the ferocious “Eye for eye, and tooth for tooth” of the Mosaic Law, and the command to turn the left cheek to the enemy when he has smitten you on the right. Is not the latter a direct encouraging of sin?
Practical Wisdom
On the tree of silence hangs the fruit of peace. The secret thou wouldst not tell to thine enemy, tell it not to thy friend. (Arabic)
Civilized Life
Crowded, noisy and full of vital power, is modern Society to the eye of matter; but there is no more still and silent, empty and dreary desert than that same Society to the spiritual eye of the Seer. Its right hand freely and lavishly bestows ephemeral but costly pleasures, while the left grasps greedily the leavings and often grudges the necessities of show. All our social life is the result and consequence of that unseen, yet ever present autocrat and despot, called Selfishness and Egotism. The strongest will becomes impotent before the voice and authority of Self.
000
The above fragments were selected from the article entitled “From the Note Book of an Unpopular Philosopher”, first published in “Lucifer” magazine, October 1887, p. 160. The text was later included in the “Collected Writings”,  H.P. Blavatsky, vol. VIII, pp. 137-139. The term “Lucifer” is a pre-Christian word for the planet Venus and means “light-bringer”. Its meaning has been distorted by Christian priests and theologians.
000
In September 2016, after a careful analysis of the state of the esoteric movement worldwide, a group of students decided to form the Independent Lodge of Theosophists, whose priorities include the building of a better future in the different dimensions of life.
000