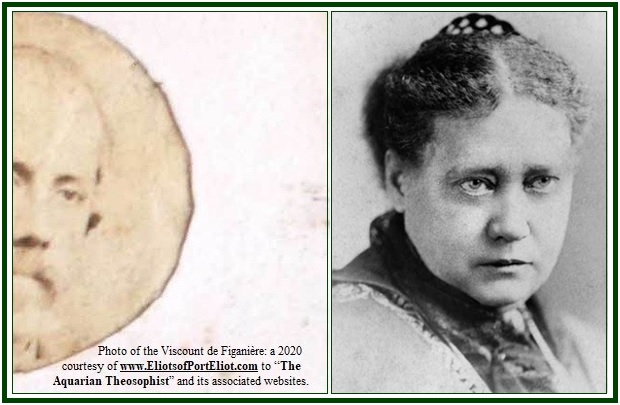 Visconde, or Viscount, de Figanière (1827-1908) and Helena Blavatsky
A 2020 Editorial Note:
The following article is transcribed from “Lucifer” magazine, February 1890 edition, pages 471-480.  The word “Lucifer” is a pre-Christian, Latin term meaning “light-bringer”. The word refers to the planet Venus, the morning star, the “elder sister” of our Earth, and has been grossly distorted by ill-advised theologians. See the articles “Lucifer: What’s In a Name?” and “The History of a Planet: Venus”.
Longer paragraphs of the article have been divided into shorter ones, so as to make a contemplative reading easier. Two of the footnotes to the article were written by Helena Blavatsky, the editor of the magazine.
Author of various valuable books, V. de Figanière (1827-1908) was a friend of H. P.  Blavatsky and a member of her Esoteric School. During the 1870s, being the diplomatic representative of Portugal in Russia – envoy and minister plenipotentiary – , he lived in Saint Petersburg in a house which belonged to her family.
(Carlos Cardoso Aveline)
Read the Article ‘About the
Ego and the Unmanifested Being’
000
The article “About the Ego and the Unmanifested Being” was published in the associated websites on 02 October 2020. It is also part of the September 2020 edition of “The Aquarian Theosophist”, pp. 04-14.
Click to see other writings by the Portuguese thinker Visconde de Figanière, who was born on 02 October 1827.
000