If One Adopts a Noble Ideal,
One Must Also Live Up to It
Carlos Cardoso Aveline 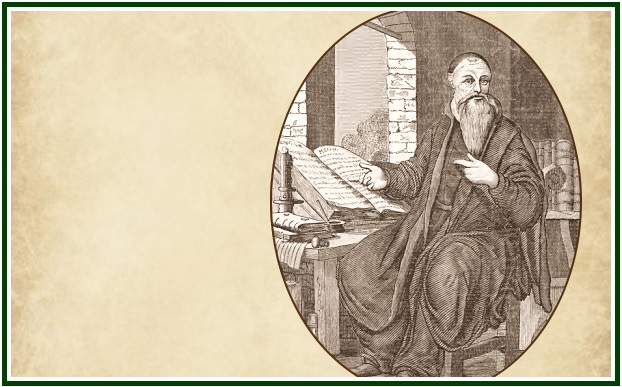 Menno Simon, or Menno Simons, the honest Anabaptist thinker of the 16th century
In a time when the main priority of many a church is its own marketing techniques, and when in some cases the priests have a too great religious interest in the bank account of their church members, it is inspiring to know of the peaceful and victorious existence of a small Christian movement whose goal is to live according to the teachings of Master Jesus, as they are presented in the New Testament.
The Amish, the Hutterites and the Mennonites preserve valuable lessons to be learnt in due time by larger human groups.
The theosophical movement has a lot to learn from them. As a student of esoteric philosophy, I am grateful to the Anabaptists by the brilliant experiential example they put before us.
The Anabaptists suffered many kinds of persecution from the clergy and Christian authorities in Europe. Being murdered in cold blood while never resisting is part of their history. Being tortured to death in an authoritarian attempts to morally destroy them was very common in the European continent during the Reformation movements, and even later. They found refuge mainly in the United States, where they live in peace.
Menno Simon, the main theologian of the Anabaptists, was born in Holland and lived from 1496 to 1561. That was the time of the New World discoveries, the Reformation and the Renaissance. Menno taught that being a Christian only in name and appearance is worse than useless. Verbal devotion is not enough. In a text about repentance, he wrote:
“…We exhort you in the language of Christ, ‘Repent ye, and believe the Gospel’, Mark, 1:15. Oh, thou faithful word of grace! Oh, thou faithful word of divine love! Thou art read in books, sung in hymns, preached with the mouth, with life and death and proclaimed in many countries, but in thy power they desire thee not; yea more, all those who rightly teach and receive thee, are made a prey  for the whole world. Alas, beloved Sirs, it will avail us nothing to be called Christians, and boast of the Lord’s blood, death, merits, grace and Gospel, as long as we are not converted from this wicked, impious and shameful life. It is in vain that we are called Christians; that Christ died; that we were born in the day of grace, and baptized with water, if we do not walk according to his law, counsel, admonition, will and command and are not obedient to his word.” [1]
For decades Catholic authorities tried in vain to capture and kill Menno. They intended to punish him because he denounced the frauds of the Vatican and the illusions of conventional Christianity.
Menno lived clandestinely and had no external peace. With his wife and children, helped by his friends, he constantly changed his place of residence.
He died at the age of 66, of natural causes, and the fact that he escaped persecution was itself a victory for the Anabaptists. His writings demonstrate great courage and complete devotion to the divine world. Menno shares with his readers a supreme commitment to the search for truth, mutual help and spiritual communion. The Anabaptist movement is even today one of the most valuable existing religious and social experiences.
The Theosophical movement and the Independent Lodge of Theosophists also celebrate the positive aspects of Christian mysticism in large churches. These partial sources of light can be seen in the Templar movement, before the fabrication of their fake version by the Jesuits in the early 19th century. The light of divine teachings is present in the works and lives of Saint Francis of Assisi, Thomas of Kempis, Nicholas of Cusa, Martin Luther, António Vieira, William Wilberforce, Teilhard de Chardin, Anthony de Mello, Saint Anthony of Lisbon and Padua, and in the works of the Portuguese priest Manuel Bernardes, among other thinkers.
Many Catholics were persecuted due the intolerance of the Vatican.
The massacre of the Templars in the early 14th century is a notable example. The Franciscans of the first centuries after Francis were brutally persecuted. António Vieira, the Portuguese-Brazilian priest and thinker, lived several years in the dungeons of the Inquisition of the Vatican. Examples are many.
In this vast context, the Anabaptist movement is a brilliant source of spiritual light. Its imperfect presence in the 21st century gives us a victorious experience of love for peace, and of the universal compassion that purifies human soul.
NOTE:
[1] “The Complete Works of Menno Simon”, University of Michigan, USA, Library, Historical Reprint Series, a facsimile reproduction of the two-volume 1871 edition, which was printed in Elkhart, Indiana, USA, by John F. Funk and Brother. Volume one has 288 pages and volume two, 452. See volume one, page 17.
000
The text “A Lesson from the Anabaptists” was published in the associated websites on 21 July 2021, being a translation from the Portuguese language article “A Lição dos Anabatistas”.
000
See the article “The Practical Philosophy of the Amish”.
Read more:
* “Reuchlin, the Father of Reformation”.
* “The Imitation of Christ”.
* “A Prayer for Those Who Heal”.
* “The Mystery of the Templars”.
* “If Christ Comes Back This Christmas”.
000