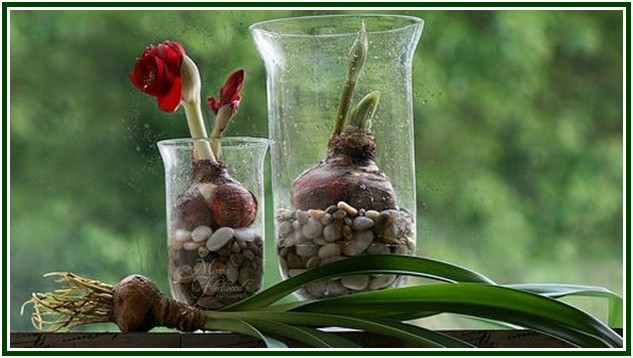 The amaryllis – here shown in three of its
phases – gives us an illustration to the process of spiritual help
0000000000000000000000000000000000000000
Editorial Note:
The following text was first published at “The
Theosophist” magazine, India, September
1884 edition, pages 299-300. At the time, “The
Theosophist” was edited by H.P. Blavatsky.
(CCA)
00000000000000000000000000000000000000000000000
For all men one rule holds good – live the purest and most unselfish life you possibly can – cultivate alike your mind and heart – detach your mind as far as possible from worldly pleasures, worldly desires, worldly objects, and set your heart as undividedly as your strength permits on doing good to all living things.
If you thus reach, or have in past lives by similar exertions, reached, a certain stage of spiritual awakenment, you will find others more advanced from whom you will receive encouragement and some little help (though in the main each soul has to work out its own road) ; if you meet none such, then you know that you have not reached the stage at which such encouragement is desirable, and you have only to persevere in the right path, quite sure that in the inexorable sequence of cause and effect that dominates the universe, you will, if not in this, at least in the next life, reach the gateway that leads to the higher life. The way may seem long and weary – but never despair; it leads to the everlasting condition, and to this sooner or later according to your own exertions and deserts  you  will attain – as all men – not utterly destroyed on the way, and these are few (the time of trial comes later) – do likewise attain.
Of what I have said before, let me try to give you an illustration. I am very fond of flowers – to those who have worked in certain lines, their beauty and fragrance have higher meanings. I receive a parcel of amaryllis bulbs, destined later to produce some of the loveliest and most gorgeous blooms known, but when received they look like a set of dry, brown, scaled coarse onions, not worthy of a second look. Knowing, however, their innate capacities, I place them carefully in dry earth in pots and leave them to themselves.
I do not water them, for the vital principle in them is still dormant and were I to try water out of season, to endeavour to stimulate them into premature growth, they would rot.  So I leave them to themselves – and weeks and weeks and sometimes months and months pass thus and no change, no progress, is discernible, though all the while in their inner tissues, action and reaction are preparing the way for higher development.
But one day, in one of them, I discern a tiny green point, pushing its way between the brown scaly skins that cover the sides of the bulb, and then I know that the period of rest is over, and that of activity is commencing, and that I may now begin to water without danger, very sparingly at first, but, as the flower stem rises and the great buds begin to show out, with generous hands.
So it is with the soul; its inner actions and reactions must have triumphed over its dormancy, and its spiritual aspirations must have pushed their way out of the dry earth of material associations into the clear air of spirituality before the watchers over the progress of their less advanced brethren, can dare to water them, however sparingly, with the water of life.
P. G. N.
000
On the role of the esoteric movement in the ethical awakening of mankind during the 21st century, see the book “The Fire and Light of Theosophical Literature”, by Carlos Cardoso Aveline.