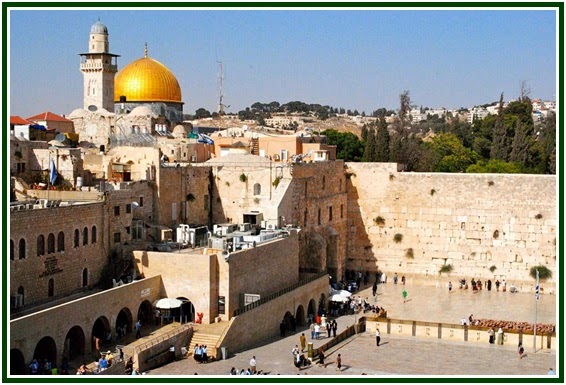 A historical view of Jerusalem city
The Land of Israel is a magnetic center of fundamental importance to human karma in its present phase.
It is the main birthplace of the three basic monotheisms of our civilization. On its soil and in the soul of its inhabitants a memory is recorded of untold and unutterable wisdom and ignorance, which comes from remote antiquity.
A sacred city for various religions, Jerusalem has been a constant focus of war and dissent, and serves as a pretext for cruelties of which no animal has ever been capable of.
Judaism is the oldest of the three monotheistic religions. It is also by far the most unjustly attacked religion in the last 2,000 years. Perhaps no other nation has been so hated, for such a long time and in such a violent way as the Jewish. But human beings get morally strengthened as they resist unjust persecution: Judaism is today more alive than ever from the ethical, philosophical and human points of view.
The wisdom tradition of Sinai has an extraordinary depth. Judaism directly challenges the ethical relativism denounced by Erich Fromm. It is still an imperfect religion, marked by the struggle between dogmatism and open-mindedness. It has much to learn. And yet, it flourishes in the attainment of universal knowledge.
As a country, Israel is an open, democratic, and utopian place which reflects the creative chaos and the contradictions present in human soul.
The Middle East includes Iran, Iraq, Syria, Turkey and other countries. It is a laboratory which works in high karmic temperatures.
In it, the lead of political and religious ignorance slowly becomes the gold of unconditional good will and mutual help. Islam, the most violent of present-day religions, must cease to despise life or worship death. Israel has friends among moderate Muslim countries and constitutes a source of alchemical transmutation for the Middle East as a whole.  It also has something to say to all of mankind.
The Western roots of our civilization are Greek, Roman and Jewish. The Jewish part of such roots, however, has been denied by Christian priests, who at the same time adopted the Hebrew Bible for themselves.
The Jewish Torah has itself older origins, as Helena Blavatsky shows in her writings. All nations are brothers and sisters, and they have much to learn from each other, as they accept to share universal wisdom.
The Islamic organizations which preach or practice violence and anti-Semitism must change their point of view and transform Islam so that it becomes a religion of peace and love of life.
Jews and Muslims are not intrinsic adversaries. They are two sister-traditions, in fact. There are Muslims in Israel, just as there are Jews in Muslim countries.
Whether we are Buddhists, Hindus, Taoists, Jews, Christians, Atheists or Muslims, we must all walk towards universal brotherhood, and this must be done with the necessary ethics, firmness and rigour. Mutual respect among nation-states constitutes an important step towards a planetary commonwealth of nations.
The feeling of respect for the Jewish state and for its capital, the city of Jerusalem, is an act of historical justice. Honest citizens must not protect acts of terrorism, nor wash hands with regard to attitudes of systematic disrespect for life. It is time now to awaken to the law of reciprocity and equilibrium.
000
The above article was also published in our blog at “The Times of Israel”.
000
Read the texts “Meditating on Peace in the Middle East”, “Occult Roots of Religious Violence” and “A Jewish Esoteric School”. They were written by Carlos Cardoso Aveline and are available at our associated websites. See also in our websites Albert Einstein’s article “Why Do They Hate the Jews?”.
000
On the role of the esoteric movement in the ethical awakening of mankind during the 21st century, see the book “The Fire and Light of Theosophical Literature”, by Carlos Cardoso Aveline.