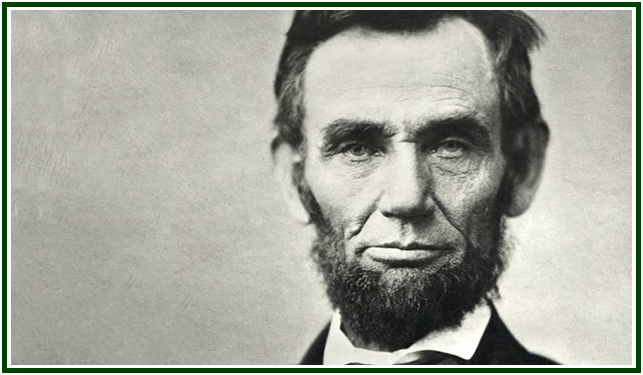 Abraham Lincoln (1809-1865)
“Our defense is in the preservation
of the spirit which prizes liberty as the
heritage of all men, in all lands, everywhere.”
(A. Lincoln in 1858)
As other good-willing individuals of every nation and time, Abraham Lincoln had a dream about the universal brotherhood of mankind, and worked for it.
In a speech in Illinois on September 11, 1858, Lincoln talked about a bright vision of the world’s future.
If it had been more strongly pursued by every nation, such ancient and modern goal would have prevented many a tragedy, including the one which took place on another September 11 – that of the year 2001.
However, our defeats can help us prepare our biggest victories, and there is still time for all nations to learn the lesson of brotherhood. Abraham Lincoln did not need to use Sanskrit words in order to talk about the Law of Karma, and he said:
“What constitutes the bulwark of our own liberty and independence? … Our reliance is in the love of liberty which God has planted in our bosoms. Our defense is in the preservation of the spirit which prizes liberty as the heritage of all men, in all lands, everywhere. Destroy this spirit, and you have planted the seeds of despotism around your own doors. Familiarize yourselves with the chains of bondage, and you are preparing your own limbs to wear them.”[1]
The bulwark, the fortification and the trench of liberty is – liberty itself. As to equality and justice, Lincoln wrote in the same year of 1858:
“As I would not be a slave, so I would not be a master. This expresses my idea of democracy. Whatever differs from this, is not democracy.” [2]
The statement is in perfect harmony with the teachings of esoteric philosophy, for in the Mahatma Letters one sees these clear words from an Eastern Sage:
“… In our sight an honest boot-black [is] as good as an honest king, and an immoral sweeper far higher than and more excusable than an immoral Emperor…” [3]
Being an independent thinker, Abraham Lincoln kept away from sects and Churches of any kind. He liked the essence better than mere outward form, and on one occasion he said these words:
“That I am not a member of any Christian church is true; but I have never denied the truth of the Scriptures; and I have never spoken with intentional disrespect of religion in general, or of any denomination of Christians in particular.” [4]
As to one’s adversaries, he wrote in a letter to his wife:
“Do good to those who hate you and turn their ill will to friendship.” [5]
But Lincoln knew that conflict is sometimes inevitable.
The same broad principles of liberty and cooperation apply to the modern theosophical movement, which constitutes a precarious nucleus of universal brotherhood, a seed planted in New York in 1875, and which in the first part of 21st century is perhaps a small seedling, weak, but alive.
Freedom is not always sustainable. Any wise and long-term exercise of liberty needs related factors like open-mindedness, sincerity, self-responsibility, and a sense of inner unity which is inseparable from outer diversity. In order to preserve freedom, one must also exert vigilance. This may sound paradoxical. But life is dangerous, and without a good deal of prudence, troubles come. Examples of this abound, and in 1863 Lincoln said:
“Mother has got a notion into her head that I shall be assassinated, and to please her I take a cane when I go over to the War Department at nights – when I don’t forget it.” [6]
Those were the security measures for the presidents of the United States at the time. Lincoln’s assassination in 1865 helps teach us that while Brotherhood must preserve Liberty, these two factors have to be preserved with Caution and some rigour. Ten years after Lincoln’s death, the modern theosophical movement was founded in New York city in order to stimulate discernment, mutual help, and wisdom among humans.
NOTES:
[1] “The Wit and Wisdom of Abraham Lincoln”, Edited by Bob Blaisdell, Dover Thrift Editions, Dover Publications, N. York, USA, 2005, 90 pp., see p. 03.
[2] “The Wit and Wisdom of Abraham Lincoln”, p. 2.
[3] “The Mahatma Letters”, transcribed by A. T. Barker, Theosophical University Press, Pasadena, CA, 1992, see Letter XXIX, p. 223.
[4] “The Wit and Wisdom of Abraham Lincoln”, p. 50.
[5] “The Wit and Wisdom of Abraham Lincoln”, p. 10.
[6] “The Wit and Wisdom of Abraham Lincoln”, p. 15.
000
In September 2016, after a careful analysis of the state of the esoteric movement worldwide, a group of students decided to form the Independent Lodge of Theosophists, whose priorities include the building of a better future in the different dimensions of life.
000