Living in the World of Eternal Wisdom
John Garrigues 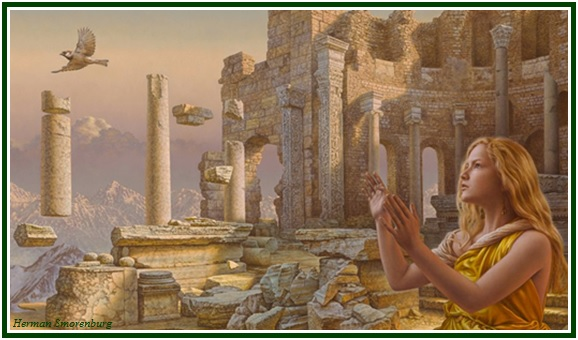 To speak of the formless Soul is to materialize it – is to give it a form. To speak of silence is to abandon it. To think of the Soul in the silence is to intrude and find it not.
Not alone the clangor of the senses makes this a world of strife, of bafflements to meditation. It is comparatively easy to shut in the house of life, close fast the outward portals, so that the din of kings and commons struggling for precedence is ruled out. When this has been intentionally done, then, indeed, does one discover that within one’s Self, and not without, is the real field of battle.
Memory, imagination, desire, thought, and feeling, are found to be no mere servants for the Soul’s use, but usurpers, traitors, instinctive, rampant, quick with life of their own, which crucify him who is seeking entrance into the silence – the “Hall of Wisdom which lies beyond”.
He who cannot command them with the sacramental phrase “peace, be still”, must needs taste the bitterness of defeat and despair; must needs go, indeed, into the only silence known to ordinary man, the silence of sleep or death – from which there is no other issue than an unconscious one. Whatever Meditation may mean to the bewildered, this is certain, that it means a conscious entering of the silence.
Who can remain at attention while the outer and inner warfare of the Soul goes on – may hope, yet Hope itself but lures the Soul along one or another corridor whose only exit is once more upon the arena of that which is not Soul.
The conscious silence which is Meditation is that unknown world peopled by Soul alone – in which the Soul is a Spectator without a spectacle. Yet, this is a way of speaking of the Un-speakable, in opposed commitments, for silence is beyond any speech, as Soul is beyond all action.
To those whose heart is set on speech, to whom action of some kind is life, Silence is empty – a void. To him whose heart is set on the world’s end, on the journey’s end, Silence is the Soul’s habitation.  Who enters the silence returns to his own place. The Un-speakable Self there knows that Time, Space, and Causality are but triple names for Silence – the Silence in which is woven the triple thread of all three worlds. In that Silence the “Soul grows as does the holy flower upon the still lagoon”.
000
The above text was first published as an anonymous note at the December 1929 edition of “Theosophy” magazine, Los Angeles, p. 84. An analysis of its contents, style and historical context shows the author is John Garrigues. It was reproduced with Garrigues’ name in the December 2014 edition of “The Aquarian Theosophist”.
000
On the role of the esoteric movement in the ethical awakening of mankind during the 21st century, see the book “The Fire and Light of Theosophical Literature”, by Carlos Cardoso Aveline.