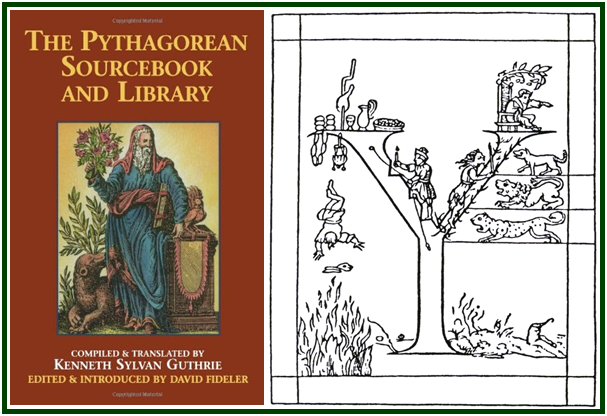 One of the editions of the Pythagorean Sourcebook and Library, and the Pythagorean “Y”
The verses and the image of the Pythagorean Y contain a challenge to students of classical and esoteric philosophy, as well as to mystics of every religion.
Of uncertain authorship, ascribed in a vague way to “Maximinus”, the verses have also been falsely ascribed to Virgil. Yet they are certainly ancient, and the main idea in them belongs to universal wisdom and literature.
They say:
“The Pythagoric Letter two ways spread,
Shows the two paths in which Man’s life is led.
The right hand track to sacred Virtue tends,
Though steep and rough at first, in rest it ends;
The other broad and smooth, but from its Crown
On rocks the Traveller is tumbled down.
He who to Virtue by harsh toils aspires,
Subduing pains, worth and renown acquires;
But who seeks slothful luxury, and flies,
The labor of great acts, dishonored dies.” [1]
The image of such a choice presenting itself to human soul is already present in Hesiod, and one finds a longer description of it at Chapter I, Book II, of Xenophon’s work on the life and sayings of Socrates.
Xenophon narrates how Hercules, in his youth, had to make the choice between the two ways.
Centuries after Xenophon, the Christian authors of the Gospels copied the idea and ascribed it to Jesus. One can see that by reading Matthew, 7: 13-15:
“Enter ye in at the strait gate: for wide is the gate, and broad is the way, that leadeth to destruction, and many there be which go in thereat: because strait is the gate, and narrow is the way, which leadeth unto life, and few there be that find it. Beware of false prophets, which come to you in sheep’s clothing, but inwardly they are ravening wolves.”
Mystical teachings are clad in symbolism.
One’s “cross” is one’s karma, and in Matthew 16: 24 one sees further information on the narrow path of the Pythagoreans:
“Then said Jesus unto his disciples, ‘If any man will come after me, let him deny himself, and take up his cross, and follow me’.”
Such a choice between the two paths is also Stoic, and it has great importance in Theosophy.  The theosophical life needs a degree of Stoic indifference to pain and pleasure.
If sincere, even an imperfect adoption of the steep and hard way that leads to transcendent truth will not be limited to the lower self of the individual. It will necessarily involve in some degree one’s higher triad and spiritual soul, or the Monad, to use the Pythagoric term. As a result of this, in future rebirths the “narrow path” becomes the equivalent to “blind destiny”. It emerges as a gift to the subsequent lower selves.
Thus a strong conscious choice made in any given time brings about “unconscious” inheritance and “natural” results in future incarnations. New personalities will be born adapted to altruism – or they will have to adapt to it, being painfully led or restrained by circumstances, until they can somehow put themselves in active harmony with the transcendent decision made in previous lives.
Worldly “failures” can therefore indicate inner victories and reflect a spiritual renunciation unknown to the lower self.
As the higher self reawakens in any given life, it withdraws its cooperation and support to the worldly efforts of the lower self, and suggests to it instead an entirely new direction – towards altruism. Because the process involves decisions made before one’s birth, it can be largely involuntary and one’s lower self will only partially perceive it.
Along the path to transcendent self-knowledge, every personal center of consciousness faces an endless succession of tests and probations. Progress along the “narrow path” goes on with varying levels of difficulty until the day when all that is “personal” is already consciously and willingly put at the service of that which is “impersonal”, and thus a lasting peace is finally found.
NOTE:
[1] Both verses and image are here reproduced from page 158 of “The Pythagorean Sourcebook and Library”. The volume was compiled and translated by Kenneth Sylvan Guthrie, and introduced and edited by David R. Fideler. It was published by Phanes Press, Grand Rapids, Michigan, USA, 1987, and has 362 pp. Another English language version of the same verses was published in the book “Homo Viator: itineraries of exile, displacement and writing in Renaissance”, by George Hugo Tucker:
“The Letter [Y] of Pythagoras, cleft by a two-pronged division,
May be seen to display the very image of human life.
For the steep path of virtue takes the righthand way,
And presents difficult access at first to onlookers,
But grants rest to the weary on its lofty summit.
The lefthand path shows the pleasant route, but its endpoint
Casts and rolls its prisoners headlong down over rough rocks.
For whoever has overcome harsh misfortunes through the love
Of virtue, will obtain for himself praise and honour.
But he who pursues sloth and indolent debauchery,
Whilst heedlessly fleeing the toils set before him,
Shameful and contemptible, leads all the while a wretched life.”
000
On the role of the esoteric movement in the ethical awakening of mankind during the 21st century, see the book “The Fire and Light of Theosophical Literature”, by Carlos Cardoso Aveline.