The Equilibrium Between
Open-Mindedness and One-Pointedness
Carlos Cardoso Aveline 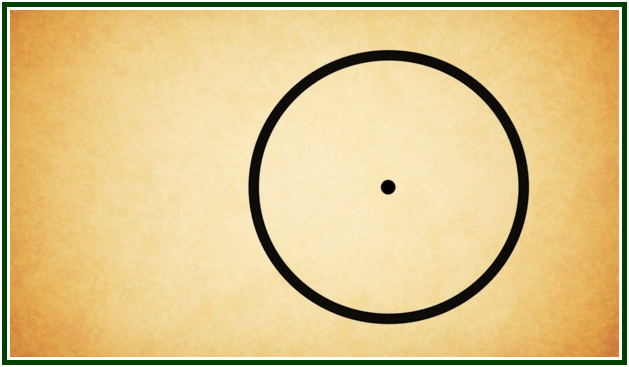 From the interaction between the point
and the circle, the whirling wheel  of life emerges
Superficial minds look for “new” topics. Deeper souls dwell on those that are important. Theosophy is true, or points to truth; pseudo-esotericism is “brilliant” and, to some, even “fascinating”.
One might pose therefore these questions:
“What is the difference between open-mindedness – and mental dispersion? Or between a broad mental horizon, and mere absence of a stable focus in consciousness?”
And, on the other hand:
“How can one see the difference between concentration and mere attachment to routine, between perseverance and lack of flexibility – or even stubbornness?”
It all seems to depend on the level of consciousness, on the principles involved.
In theosophy, open-mindedness and concentration must be combined. They are both needed, for they are two inseparable functions of the higher Self.
In one’s individual world, the mental horizon must be broad enough to constitute a meeting point between the sky and the earth, the human and the divine, the finite and the infinite. Such a contrast allows us to have an accurate vision. It constitutes the perfect circle. It is essentially impersonal.
On the other hand, the main focus in one’s consciousness corresponds to the point in the center of the abstract circle. Such a point implicitly contains the circle. It is the Sun in its system. It relates to aim and to action. It is the source of Will.[1] It is the Observer, and also the warrior in terms of the classical work “Light on the Path”.
From the interaction between the point and the circle, the whirling wheel of life emerges, and from it life is inspired.
How to combine then open-mindedness with one-pointedness?
It is in Buddhi-Manas, the spiritual mind, or in a manasic (mental) area existing under the direct influence of Buddhi-Manas, that one better conciliates and combines a wide vision of life with a firm, stable purpose in action.
One way to do that is to dwell on universal principles and ideas. The great truths of all time provide us both an unlimited horizon and a stable purpose. This leads to true contemplation exercised across night and day, in sleep and in awakening hours.
Argentinian writer Jorge Luis Borges, who some consider to have been “too big a writer to get a Nobel Prize in Literature”, [2] lived in this sphere.
His life and his writing process were a single and permanent meditation. In the Introduction to the University of Texas Press edition of his book “Other Inquisitions (1937-1952)”, one can read:
“Borges’ entire work, filled with recurring variants of the same interlocking themes, is (….) a repeated approximation of archetypes…” (p. xiii).
More than a few theosophists have followed the same path.
They live in a 24 hours meditative dimension which both inspires and surrounds every aspect of their life. Human factors like imperfection and suffering are fully present. At the same time, these aspects of existence are transcended, as in a paradox. For they are situated and find their meaning in a much broader context: the unlimited, unfathomable line leading to the everlasting circle of unspeakable bliss.
NOTES:
[1] We do not mention here the concept of Pascal’s circle, nor the central importance of the point-and-circle interaction in the cosmogony of theosophical philosophy.  There is no need for that reference. It goes without saying.
[2] The Nobel Prize in literature usually aims at revealing new authors, rather than at making homage to well-known thinkers.
000
In September 2016, after a careful analysis of the state of the esoteric movement worldwide, a group of students decided to form the Independent Lodge of Theosophists, whose priorities include the building of a better future in the different dimensions of life.
000