A  Talmudic Tale Examines the
Significance of Outer Phenomena
Anonymous 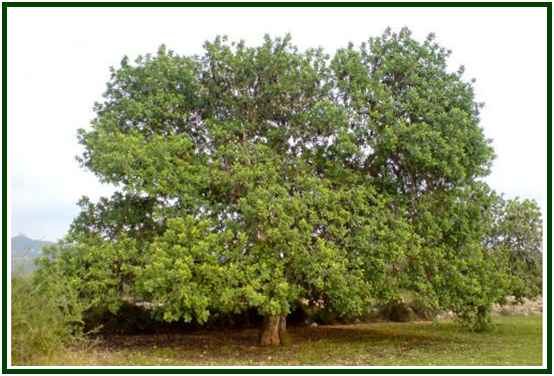 A Karoub or Carob tree
Editorial Note:
The word “Lucifer” literally means “Light-Bringer” and is the ancient name of the planet Venus. The term has been distorted since the Middle Ages.
The following text is reproduced from “Lucifer” magazine, London, January 1890 edition, p. 490.[1] The story illustrates the Buddhist, Platonic and Theosophical principle of individual independence of each learner. It exemplifies the fact that free debate must exist among truth-seekers, while hypocrisy looks for unanimity.
Finally, this Talmudic tale shows that occult phenomena and psychic powers have no spiritual importance in themselves, and clearly belong to the lower levels of reality.
In the following transcription, we open smaller paragraphs in order to make a contemplative reading easier.
(Carlos Cardoso Aveline)
000
The Place of Miracles
Anonymous
On a certain day, Rabbi Eliezer Ben Orcanaz replied to the questions proposed to him, concerning his teaching; but his arguments being found to be inferior to his pretensions the doctors present refused to admit his conclusions.
Then Rabbi Eliezer said, “My doctrine is true, and this Karoub tree, which is near us, shall demonstrate the infallibility of my teaching.”
Immediately the Karoub tree, obeying the voice of Eliezer, arose out of the ground and planted itself a hundred cubits farther off.
But the Rabbis shook their heads, and answered:
“The Karoub tree proves nothing.”
“What”, cried Eliezer, “you resist so great a miracle? Then let this rivulet flow backwards, and attest the truth of my doctrine.”
Immediately the rivulet, obeying the command of Eliezer, flowed backwards towards its source. But again the Rabbis shook their heads and said, “The rivulet proves nothing. We must understand before we can believe.”
“Will you believe me”, said Rabbi Eliezer, “if the walls of this house wherein we sit should fall down?” And the walls, obeying him, began to fall, until Rabbi Joshua exclaimed:
“By what right do the walls interfere in our debates?”
Then the walls stopped in their fall out of respect to Rabbi Joshua, but remained leaning out of respect for Rabbi Eliezer, and remain leaning until this day. But Eliezer, mad with rage, cried out:
“Then in order to confound you, and since you compel me to it, let a voice from Heaven be heard!”  And immediately the Bath-Kol or Voice from Heaven was heard at a great height in the air, and it said:
“What are all the opinions of the Rabbis compared to the opinion of Rabbi Eliezer? When he has spoken his opinion ought to prevail.”
Hereupon Rabbi Joshua rose and said:
“It is written, ‘The law is not in Heaven; it is in your mouth and in your heart.’ It is in your reason; for again it is written, ‘I have left you free to choose between life and death, and good and evil.’ And it is in your conscience, for ‘If ye love the Lord, and obey His voice within you, you will find happiness and truth.’ Wherefore then does Rabbi Eliezer bring in a Karoub tree, a rivulet, a wall, and a voice to settle questions of doctrine. And what is the only conclusion that can be drawn from such miracles, but that they who have expounded the laws of nature have not wholly understood them, and that we must now admit that in certain cases a tree can unroot itself, a rivulet flow backwards, walls obey instructions, and voices sound in the air? But what connection is there between these observations and the teaching of Rabbi Eliezer? No doubt these miracles were very extraordinary and they have filled us with astonishment; but to amaze is not to argue, and it is argument, not phenomena, that we require. When therefore, Rabbi Eliezer shall have proved to us that Karoub trees, rivulets, walls, and unknown voices afford us, by unusual manifestations, reasonings equal in value and weight to that reason which God has placed within us to guide our judgment, then alone will we make use of such testimonies and estimate them as Eliezer requires.”
[The Talmud]
NOTE:
[1] The text was also published in the July 2013 edition of “The Aquarian Theosophist”, pp. 5-6.
000
In September 2016, after a careful analysis of the state of the esoteric movement worldwide, a group of students decided to form the Independent Lodge of Theosophists, whose priorities include the building of a better future in the different dimensions of life.
000