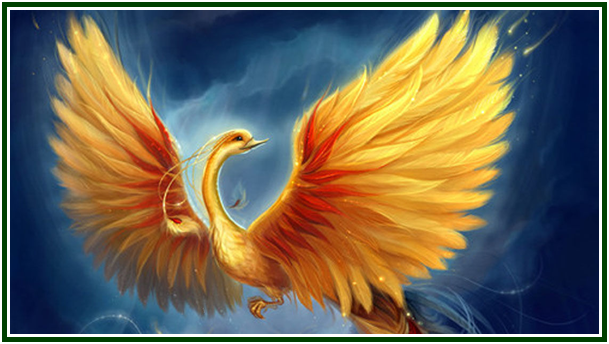 A 2016 Editorial Note:
Helena P. Blavatsky wrote in the nineteenth century that the myth of Phoenix relates to the Law of existence and being.
It is the bird of resurrection in Eternity, she added, “in whom night follows the day, and day the night – an allusion to the periodical cycles of cosmic resurrection and human re-incarnation”.[1]
The bird that symbolizes the law of cycles is known in many different cultures. The length of its life-cycle varies according to circumstances. The founder of the modern esoteric movement explained:
“The Phoenix – called by the Hebrews Onech (from Phenoch, Enoch, symbol of a secret cycle and initiation), and by the Turks, Kerkes – lives a thousand years, after which, kindling a flame, it is self-consumed; and then, reborn from itself – it lives another thousand years, up to seven times seven (…),  when comes the day of Judgment.” [2]
A few lines later, H.P.B. quoted these words from author E.V. Kenealy:
“The [Persian mythical bird] Simorgh is in reality the same as the winged Singh of the Hindus, and the Sphinx of the Egyptians. It is said that the former will appear at the end of the world ….. as a monstrous lion-bird. From these the Rabbis have borrowed their mythos of an enormous Bird, sometimes standing on the Earth, sometimes walking in the ocean…”.[3]
In the fairy tale that follows, Hans Christian Andersen shows in his own special way that myth and poetry work together in recording, preserving and expressing universal wisdom.
(Carlos Cardoso Aveline)
000
The Phoenix Bird
Hans Christian Andersen
In the Garden of Paradise, beneath the Tree of Knowledge, bloomed a rose bush. Here, in the first rose, a bird was born. His flight was like the flashing of light, his plumage was beauteous, and his song ravishing.
But when Eve plucked the fruit of the tree of knowledge of good and evil, when she and Adam were driven from Paradise, there fell from the flaming sword of the cherub a spark into the nest of the bird, which blazed up forthwith.
The bird perished in the flames; but from the red egg in the nest there fluttered aloft a new one – the one solitary Phoenix bird. The fable tells that he dwells in Arabia, and that every hundred years, he burns himself to death in his nest; but each time a new Phoenix, the only one in the world, rises up from the red egg.
The bird flutters round us, swift as light, beauteous in color, charming in song. When a mother sits by her infant’s cradle, he stands on the pillow, and, with his wings, forms a glory around the infant’s head. He flies through the chamber of content, and brings sunshine into it, and the violets on the humble table smell doubly sweet.
But the Phoenix is not the bird of Arabia alone. He wings his way in the glimmer of the Northern Lights over the plains of Lapland, and hops among the yellow flowers in the short Greenland summer. Beneath the copper mountains of Fablun, and England’s coal mines, he flies, in the shape of a dusty moth, over the hymnbook that rests on the knees of the pious miner. On a lotus leaf he floats down the sacred waters of the Ganges, and the eye of the Hindoo maid gleams bright when she beholds him.
The Phoenix bird, dost thou not know him? The Bird of Paradise, the holy swan of song! On the car of Thespis he sat in the guise of a chattering raven, and flapped his black wings, smeared with the lees of wine; over the sounding harp of Iceland swept the swan’s red beak; on Shakespeare’s shoulder he sat in the guise of Odin’s raven, and whispered in the poet’s ear “Immortality!” and at the minstrels’ feast he fluttered through the halls of the Wartburg.
The Phoenix bird, dost thou not know him? He sang to thee the Marseillaise, and thou kissedst the pen that fell from his wing; he came in the radiance of Paradise, and perchance thou didst turn away from him towards the sparrow who sat with tinsel on his wings.
The Bird of Paradise – renewed each century – born in flame, ending in flame! Thy picture, in a golden frame, hangs in the halls of the rich, but thou thyself often fliest around, lonely and disregarded, a myth – “The Phoenix of Arabia”.
In Paradise, when thou wert born in the first rose, beneath the Tree of Knowledge, thou receivedst a kiss, and thy right name was given thee – thy name, Poetry.
NOTES:
[1] “The Secret Doctrine”, Helena P. Blavatsky, Theosophy Co., volume I, p. 312.
[2] “The Secret Doctrine”, HPB, volume II, p. 617.
[3] “The Secret Doctrine”, vol. II, p. 618.
000
The above story is reproduced from the book “The Complete Hans Christian Andersen Fairy Tales”, edited by Lily Owens, Avenel Books, New York, 803 pages, 1981, p. 629.
000