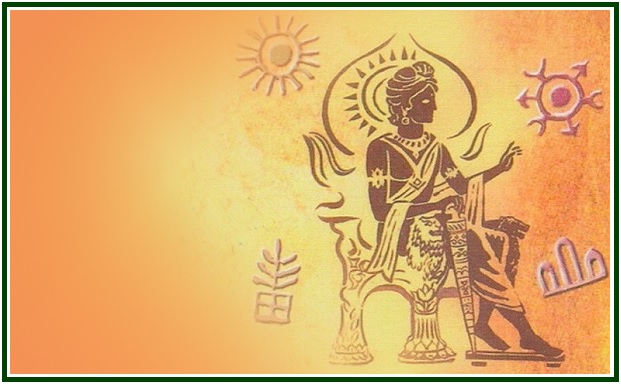 .”
Blavatsky proceeds:
“In the Aryan Esotericism, as in the Semitic, this letter has always stood for the waters; e.g., in Sanskrit MAKARA – the tenth sign of the Zodiac – means a crocodile, or rather an aquatic monster associated always with water. The letter MA is equivalent to and corresponds with number 5 – composed of a binary, the symbol of the two sexes separated, and of the ternary, symbol of the third life, the progeny of the binary. This, again, is often symbolised by a Pentagon, the latter being a sacred sign, a divine Monogram.”
Many sacred terms start with “M”:
“MAITREYA is the secret name of the Fifth Buddha, and the Kalki Avatar of the Brahmins – the last MESSIAH who will come at the culmination of the Great Cycle. It is also the initial letter of the Greek Metis or Divine Wisdom; of Mimra, the ‘word’ or Logos; and of Mithras (the Mihr), the Monad, Mystery. All these are born in, and from, the great Deep, and are the Sons of Maya – the Mother; in Egypt, Mouth, in Greece Minerva (divine wisdom), Mary, or Miriam, Myrrha, etc.; of the Mother of the Christian Logos, and of Maya, the mother of Buddha. Madhava and Madhavi are the titles of the most important gods and goddesses of the Hindu Pantheon. Finally, Mandala is in Sanskrit ‘a circle’ or an orb (the ten divisions of the Rig Veda). The most sacred names in India begin with this letter generally – from Mahat, the first manifested intellect, and Mandara, the great mountain used by the gods to churn the Ocean, down to Mandakin, the heavenly Ganga (Ganges), Manu, etc., etc.”
Blavatsky then asks:
“Shall this be called a coincidence? A strange one it is then, indeed, when we find even Moses – found in the water of the Nile – having the symbolical consonant in his name. And Pharaoh’s daughter ‘called his name Moses ….. because’, she said, ‘I drew him out of WATER’ (Exod. ii., 10.) Besides which the Hebrew sacred name of God applied to this letter M is Meborach, the ‘Holy’ or the ‘Blessed’ and the name for the water of the Flood is M’bul. A reminder of the ‘three Maries’ at the Crucifixion and their connection with Mar, the Sea, or Water, may close this example. This is why in Judaism and Christianity the Messiah is always connected with Water, Baptism, the Fishes (the sign of the Zodiac called Meenam in Sanskrit), and even with the Matsya (fish) Avatar, and the Lotus – the symbol of the womb, or the water-lily, which is the same.”
“In the relics of ancient Egypt”, says the great Russian disciple of the Masters, “the greater the antiquity of the votive symbols and emblems of the objects exhumed, the oftener are the lotus flowers and the water found in connection with the Solar Gods.” [17]
Blavatsky’s study in the letter “M” and the way she thinks while examining the issue serve as practical examples of universal consciousness.
In theosophy, one’s mind expands and one’s heart remains simple. Discernment gets sharper as common sense unfolds. One must be a personal friend of the Void, for the Void is the place where each thing and universal truth dwell. As the consciousness of a student embraces the Ocean of time and wisdom, his feet get firmer on the ground.
NOTES:
[1] From “Atlas of Ancient Worlds”, a pictorial atlas of past civilizations, by Dr. Anne Millard, Illustrated by Russell Barnett, published by Dorling Kindersley, London-New York-Stuttgart, 1994, 64 pp., see p. 46.
[2] Note by H. P. Blavatsky: “Of the dynasty of Moriyan Sovereigns”, as said in the Mahâvan?a – the particulars of this legend are recorded in the Atthakathâ of the Uttaravihâra priests.
[3] Boris de Zirkoff reports that this refers to the same text as on pp. 246-247, and 256-258, in Vol. V of the “Collected Writings”.
[4] Besides “The Theosophist”, December 1883, p. 99, Blavatsky’s answer will be found in the book “Five Years of Theosophy”, pp. 483-484, and in her “Collected Writings”, volume VI, pp. 40-42.
[5] First-published in the November 1883 edition of “The Theosophist”, pp. 38-43. Also published in “Five Years of Theosophy” (Theosophy Co., pp. 365-388) and in “Collected Writings” of H.P. Blavatsky, TPH, volume V, pp. 241-259. On the fact that the statues date from the first year after Sakya Muni’s death, see footnote on p. 246, “Collected Writings”, volume V.
[6] “Collected Writings”, vol. V, p. 246.
[7] “Collected Writings”, vol. V, p. 245.
[8] “Collected Writings”, vol. V, p. 246, footnote.
[9] “The Secret Doctrine”, vol. I, pp. 377-378.
[10] Note by HPB: “Matsya Purana” gives “Katapa”.
[11] “The Bhagavad-Gita”, from the Sanskrit by William Q. Judge, Theosophy Co., Los Angeles, 1986, 133 pages, Chapter Fourth, see p. 31.
[12] “Gita the Mother, Commentary by Dnyaneshwar Maharaj”, translated in English by Manu Subedar, Kalyani publishers, New Delhi, India, 1972, 318 pp., see chapter 4, p. 81.
[13] Note by HPB: A title of the Tashi-lhunpo Lama.
[14] See volume XIV, page 431, of HPB’s Collected Writings (TPH).
[15] See in our websites the articles “The Making of an Avatar”, “Krishnamurti and Theosophy”, and “Krishnamurti on Besantian Delusions”, by Carlos Cardoso Aveline; besides “Besant Announces She Is An Adept”, by Mary Lutyens.
[16] To know more about the work of the Masters in different parts of the world, readers will find in our associated websites the articles “The Observatory of Luxor” and “The Ancient Theosophy in the Andes”, both by C. C. Aveline.
[17] “The Secret Doctrine”, H. P. Blavatsky, Theosophy Co., volume I, pp. 384-385.
000
In September 2016, after a careful analysis of the state of the esoteric movement, a group of students decided to form the Independent Lodge of Theosophists, whose priorities include the building of a better future in the different dimensions of life.
000