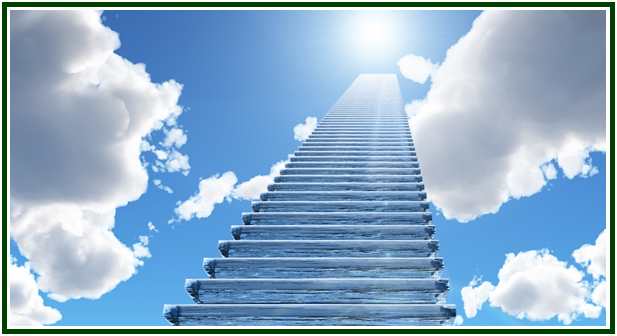 The Idea of a Ladder to Sky is a Symbol of the Path to Wisdom
000000000000000000000000000000000000000000000
Editorial Note:
Theosophy teaches that each individual has in his
own consciousness a ladder to the celestial or immortal
perception of life. Its technical name is “Antahkarana”.
In the classical theosophical work “Light on the Path”
(Theosophy Company, India, Part I, Rule 20), one can see:
“All steps are necessary to make up the ladder. The
vices of men become steps in the ladder, one by one,
as they are surmounted. The virtues of man are steps
indeed, necessary – not by any means to be dispensed with.”
The following poem by Henry Wadsworth Longfellow
(1807-1882) expresses and expands this central axiom of
the timeless Eastern esoteric tradition. While discussing
the metaphoric Ladder to Wisdom, the poem constitutes
a study in theosophy and alchemy. It is here reproduced
from “The Works of Henry Wadsworth Longfellow”, The
Wordsworth Poetry Library, U.K., 1994, 886 pp., pp. 299-300.
(Carlos Cardoso Aveline)
00000000000000000000000000000000000000000000000000000
Saint Augustine! well hast thou said,
That of our vices we can frame
A ladder, if we will but tread
Beneath our feet each deed of shame!
All common things, each day’s events,
That with the hour begin and end,
Our pleasures and our discontents,
Are rounds by which we may ascend.
The low desire, the base design,
That makes another’s virtues less;
The revel of the ruddy wine,
And all occasions of excess;
The longing for ignoble things;
The strife for triumph more than truth;
The hardening of the heart, that brings
Irreverence for the dreams of youth;
All thoughts of ill; all evil deeds,
That have their root in thoughts of ill;
Whatever hinders or impedes
The action of the nobler will;-
All these must first be trampled down
Beneath our feet, if we would gain
In the bright fields of fair renown
The right of eminent domain.
We have not wings, we cannot soar;
But we have feet to scale and climb
By slow degrees, by more and more,
The cloudy summits of our time.
The mighty pyramids of stone
That wedge-like cleave the desert airs,
When nearer seen, and better known,
Are but gigantic flights of stairs.
The distant mountains, that uprear
Their solid bastions to the skies,
Are crossed by pathways, that appear
As we to higher levels rise.
The heights by great men reached and kept
Were not attained by sudden flight,
But they, while their companions slept,
Were toiling upward in the night.
Standing on what too long we bore
With shoulders bent and downcast eyes,
We may discern – unseen before –
A path to higher destinies.
Nor deem the irrevocable Past,
As wholly wasted, wholly vain,
If, rising on its wrecks, at last
To something nobler we attain.
000
In September 2016, after a careful analysis of the state of the esoteric movement worldwide, a group of students decided to form the Independent Lodge of Theosophists, whose priorities include the building of a better future in the different dimensions of life.
000