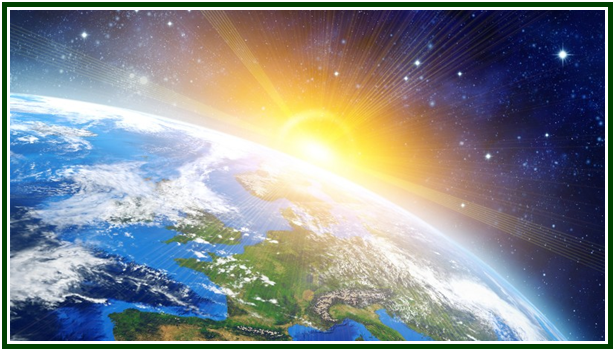 Has our present humanity attained already – in its fifth root-level of development – the zenith and glory of its physical intellectuality? Has it developed its highest form of civilization? Is it unable, then, to go any higher in its own cycle?
These questions are important, for if the answers would be in affirmative, we would be in this first half of 21st century on the eve of – or perhaps actually in the beginnings of – major cataclysmic, ecological and geological changes.
A Master of the Wisdom wrote, and his lay disciple Alfred Sinnett quoted in his book “Esoteric Buddhism”:
“The approach of every new obscuration is always signalled by cataclysms of either fire or water. But, apart from this, every root race has to be cut in two, so to say, by either one or the other. Thus, having reached the apex of its development and glory, the fourth race – the Atlanteans – were destroyed by water; you find now but their degenerate fallen remnants, whose sub-races, nevertheless, each of them, has its palmy days of glory and relative greatness. What they are now, you will be some day, the law of cycles being one and immutable. When your race, the fifth, will have reached its zenith of physical intellectuality, and developed its highest civilization (remember the difference we make between material and spiritual civilizations), unable to go any higher in its own cycle, its progress towards absolute evil will be arrested (as its predecessors, the Lemurians and the Atlanteans, the men of the third and fourth races, were arrested in their progress towards the same) by one of such cataclysmic changes, its great civilization destroyed, and all the sub-races of that race will be found going down their respective cycles, after a short period of glory and learning. See the remnants of the Atlanteans, the old Greeks and Romans (the modern belong to the fifth race). See how great and how short, how evanescent were their days of fame and glory. For they were but sub-races of the seven offshoots of the root race. No mother race, any more than her sub-races and offshoots, is allowed by the one reigning law to trespass upon the prerogatives of the race or sub-race that will follow it; least of all to encroach upon the knowledge and powers in store for its successor.” [1]
To this, A.P. Sinnett adds:
“The ‘progress towards absolute evil’, arrested by the cataclysms of each race in turn, sets in with the acquisition, by means of ordinary intellectual research and scientific advancement, of those powers over Nature which accrue even now in adeptship from the premature development of higher faculties than those we ordinarily employ. I have spoken slightly of these powers in a preceding chapter, when endeavouring to describe our esoteric teachers; to describe them minutely would lead me into a long digression on occult phenomena. It is enough to say that they are such as cannot but be dangerous to society generally, and provocative of all manner of crimes which would utterly defy detection, if possessed by persons capable of regarding them as anything else but a profoundly sacred trust. Now some of these powers are simply the practical application of obscure forces of Nature, susceptible of discovery in the course of ordinary scientific progress. Such progress had been accomplished by the Atlanteans.” [2]
At this point in the paragraph, and writing in the 1880s, Sinnett mentions the Atlantean equivalent to nuclear energy and atomic bombs.
He writes:
“The worldly men of science in that race had learned the secrets of the disintegration and reintegration of matter, which few but practical spiritualists as yet know to be possible, and of control over the elementals, by means of which that and other even more portentous phenomena can be produced. Such powers in the hands of persons willing to use them for merely selfish and unscrupulous ends must not only be productive of social disaster, but also for the persons who hold them, of progress in the direction of that evilly spiritual exaltation which is a far more terrible result than suffering and inconvenience in this world. Thus it is, when physical intellect, unguarded by elevated morality, runs over into the proper region of spiritual advancement, that the natural law provides for its violent repression.” [3]
After reading these lines one should examine: is the present “scientific”, materialistic, consumerist, morally debasing, nuclear-weapon-based, technocratic, nature-destroying, TV-controlled society and civilization – ethical enough from the point of view of Karmic Law?
Has it arrived to its highest point in material intellectuality?
One might ask oneself also whether the theosophical movement is fulfilling its duty regarding the subject of “Science”.
Perhaps theosophists are not showing clearly enough to present-day scientists “the real crux of the matter” as to their “ethics-free” and “duty-free”, money-centered, pseudo-scientific activities.
One might conclude that the present materialistic civilization is “outdated”. Yet the esoteric movement is far from being angelically separated from such a Karma. Theosophy does not believe in the angels of imaginative exoteric religions. Therefore these may be some interesting issues to examine:
1) Does the esoteric movement have a real sense of responsibility for the future?
2) Does such a sense of duty cause an intense action, in research and in teaching true Theosophy as a means to understand where we are and where we want and need to go?
Readers who have an interest in these questions are invited to write to us.
NOTES:
[1] “Esoteric Buddhism”, by Alfred P. Sinnett, Wizards Bookshelf, Secret Doctrine Reference Series, San Diego, California, USA, 2003, 254 pp., see pp. 71-72.
[2] “Esoteric Buddhism”, by A.P. Sinnett, p. 72.
[3] “Esoteric Buddhism”, by A.P. Sinnett, pp. 72-73.
000
In September 2016, after a careful analysis of the state of the esoteric movement worldwide, a group of students decided to form the Independent Lodge of Theosophists, whose priorities include the building of a better future in the different dimensions of life.
000