The Longest Text in the Book “Practical
Occultism” Was Not Penned by H.P. Blavatsky
Carlos Cardoso Aveline 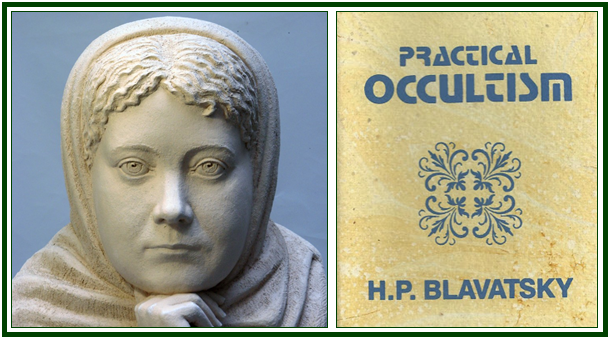 Partial view of a sculpture of HPB made by Alexey Leonov (left),
and the front cover of  “Practical Occultism”, India-TPH  edition
000000000000000000000000000000000000000000
The following text reproduces Chapter Twelve of
the book “The Fire and Light of Theosophical
Literature”, by Carlos Cardoso Aveline,  The
Aquarian Theosophist, Portugal, 255 pp., 2013.
000000000000000000000000000000000000000000000000
First published in 1948 by the Theosophical Publishing House of the Adyar Society, the little volume “Practical Occultism” presents the name of Helena P. Blavatsky as its author, but the largest of its three articles was not written by her.
The name of its true author is still unknown.
Widely circulating around the world for several decades in different languages and countries, the pocket-size book “Practical Occultism”  [1]  has 106 pages and one big mistake.
The article wrongly ascribed to HPB is entitled “Some Practical Suggestions for Daily Life” and goes from page 63 up to the end of the volume. It occupies some 40 per cent of the book.
The first two texts in the volume were indeed penned by HPB. Their titles are “Practical Occultism” and “Occultism Versus the Occult Arts”. As to the third and largest text, besides not having been written by HPB, it contains a number of erroneous ideas. Some of them deserve an examination. Right at the opening paragraph, for instance, “Some Practical Suggestions for Daily Life” says:
“Rise early, as soon as you are awake, without lying idly in bed, half-waking and half-dreaming. Then earnestly pray that all man-kind may be spiritually regenerated, that those who are struggling on the path of truth may be encouraged by your prayers and work more earnestly and successfully and that you may be strengthened and not yield to the seductions of the senses. Picture before your mind the form of your Master as engaged in Samadhi. Fix it before you, fill in all the details, think of him with reverence, and pray that all mistakes of omission and commission may be forgiven. This will greatly facilitate concentration, purify your heart, and do much more.” [2]
In theosophy, however, students are not taught to pray. H.P. Blavatsky examined the subject in the section five of her book “The Key to Theosophy”. In the dialogue between the “Enquirer” and the “Theosophist”, it is asked:
“Do you believe in prayer, and do you ever pray?”
And “Theosophist” answers:
“We do not. We act, instead of talking.”
The Enquirer insists:
“You do not offer prayers even to the Absolute Principle?”
To which the answer is quite clear:
“Why should we? Being well-occupied people, we can hardly afford to lose time in addressing verbal prayers to a pure abstraction.”
In the paragraphs following this, Blavatsky explains that in theosophy there is only a WILL-PRAYER, which is “rather an internal command than a petition”. [3]
The discussion goes on for several pages. HPB clarifies that one of the reasons to reject the practice of prayers as petitions to any external power is that they destroy self-reliance in the consciousness of the student.
By making prayers, a devotee takes a passive attitude before life and tries to convince himself that he can obtain a sort of “karmic irresponsibility”. Denial of the Karmic Law through a naive devotion to some “saviour” is one of the main forms of illusion in popular spirituality. Each student must develop his own active and creative Will, and make an effort to sow that which he would like to harvest.
In discipleship, it is not acceptable to expect personal help from a Master, or to pray that a Teacher would remove the consequences of one’s mistakes. One has to learn from the results of one’s actions, instead of wishing they were erased by some super-natural power.
The duty of a Master is not to distribute absolutions. It is to give the student elements of information so that he can work with autonomy and altruism towards self-liberation through self-knowledge, and then self-forgetfulness.
One must know oneself in order to be able to forget oneself.
It is enough to take a look at “Some Practical Suggestions for Daily Life” to see that it is a compilation of paragraphs taken from various books and articles, and that such a contents couldn’t have been penned by HPB. [4]
NOTES:
[1] “Practical Occultism”, H.P. Blavatsky, The Theosophical Publishing House, Adyar, Madras (Chennai), India; Wheaton, Ill., USA; London, England. Copyright TPH 1948. First edition 1948. Second to Sixth printing 1959-1981. Seventh printing 1987. Eight printing 1989. Printed at the Vasanta Press, Adyar, India, 106 pp.
[2] “Practical Occultism”, pp. 67-68.
[3] “The Key to Theosophy”, Theosophy Co., Los Angeles, 1987, 310 pp., see pp. 66-67.
[4] The text was analyzed by several researchers. In the second semester of 2005, unpublished annotations made by Canadian researchers Ernest Pelletier and Ted G. Davy, and individual commentaries written by North-American theosophist Dallas TenBroeck were kindly sent to us. Ernest Pelletier made considerations as to the name of the real author of “Some Practical Suggestions for Daily Life”. Pelletier and Davy gave emphasis to the fact that these transcriptions are not correctly done. The would-be quotations include ideas not present in the original texts and distort some of them, having no value as transcriptions. Mr. Dallas TenBroeck (1922 – 2006), a long-standing associate of the ULT, examined many of the paragraphs in the text and showed that their contents are rather senseless. In October 2005, Jerome Wheeler also helped getting evidences on the subject.
000
In September 2016, after a careful analysis of the state of the esoteric movement worldwide, a group of students decided to form the Independent Lodge of Theosophists, whose priorities include the building of a better future in the different dimensions of life.
000