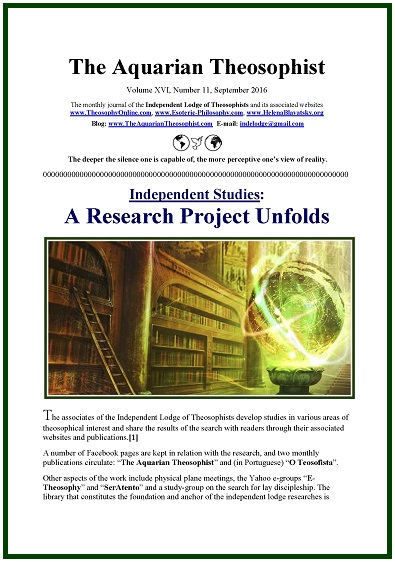 This is the opening thought of the September edition:
“The deeper the silence one is capable of, the more perceptive one’s view of reality.”
On pages one and two, the article “A Research Project Unfolds” looks at the theosophical movement as a community of independent students, with no attachment to the dead letter, but loyal to the spirit of the original theosophical teachings.
On pages three and four, “Effective Study in Philosophy: The Nature of an Independent Lodge”. Then the fragment “Movement Was Founded in September”. On page five, “Neptune and Saturn: Lessons from a Tempest”  is an exercise in learning from the astrological sky these days.
“Dwight Eisenhower On Peace” is at page six. Page seven presents “On the Roots of Spiritual Life”, by Ivan A. Il’in.  On page eight, very brief remarks on “How Freud Helps Theosophists”. “The Mystery of Right Action” is on page nine.
These are other topics examined in the September 2016 edition of the “Aquarian”:
* Living the Search for Truth;
* Feeling Respect for the Future;
* The Light of Goodness;
* Naive Views Dating From 1789;
* Independent Lodge: the Influence of Numbers;
* The Invisible Power of Good Will;
* Five Fragments from the ‘Wen-Tzu’;
* Thoughts Along the Road;
* A Message to the ULT in Los Angeles; and
* Man is a Copy of the Universe.
The 20 pp. edition includes the List of New Texts in our associated websites.
Click Here to Read
“The Aquarian”, September 2016
000
You can find the entire collection of “The Aquarian”  at our associated websites.
000
On the role of the esoteric movement in the ethical awakening of mankind during the 21st century, see the book “The Fire and Light of Theosophical Literature”, by Carlos Cardoso Aveline.