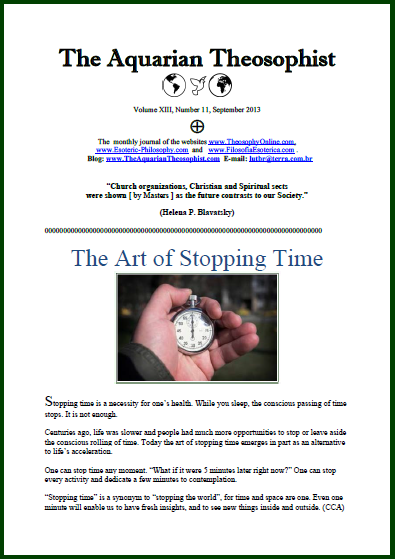 The opening quotation of the September 2013 edition is a sentence by Helena P. Blavatsky.
She says:
“Church organizations, Christian and Spiritual sects were shown [ by Masters ] as the future contrasts to our Society.”
On page one, the opening note “The Art of Stopping Time” examines the practice of interrupting outer routines at any moment, in order to grant an immediate expansion in one’s consciousness.
On pages 2 and 3, we have a Fragment of a Letter From a Mahatma, on the Story of Life, and a painting by Wojtek Siudmak.  Then there is “The Three Levels of Fire”, which reproduces a few paragraphs from “Isis Unveiled”.
A note on p. 4 discusses the moment when sincerity becomes unavoidable. But there may be a price to pay for being honest.
On page 5, the reader sees “The Four Objects of the Movement”. On p. 6, “The Sociology of Esoteric Wisdom”, and on p. 7, we have the short article “How Best to Judge People, since it is useless to pretend that we do not do so”.
The Law of Impermanence and the cycle of 24 hours are the topics of two notes on pp. 8 and 9.
On pp. 9 and 10, there is a surprising confession which J. Krishnamurti made to a friend on his “theosophical” education.
Pages 11-18 present an article by Maurício Andrés Ribeiro entitled “The Ecological Footprint of India”. The essay brings us a few practical lessons in planetary citizenship.
The symbolism of a young tortoise’s presence in one of the editorial offices of The Aquarian in Europe, and a note on the need to innovate along the path, are presented on pp. 19 and 20.
The 21 pp. September 2013 edition concludes with the  List of New Texts  in www.TheosophyOnline.com  and associated websites.
Click here to see the September 2013
edition of “The Aquarian Theosophist”
000
You can find the entire collection of “The Aquarian Theosophist” in our associated websites.
000
On the role of the esoteric movement in the ethical awakening of mankind during the 21st century, see the book “The Fire and Light of Theosophical Literature”, by Carlos Cardoso Aveline.