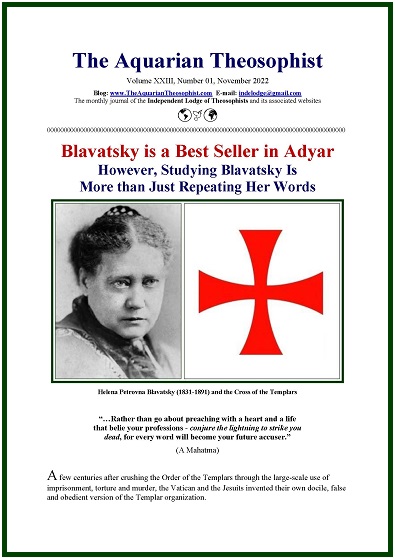 The November 2022 edition starts with the article “Blavatsky is a Best Seller in Adyar”, whose subtitle says:
“However, Studying Blavatsky Is More than Just Repeating Her Words”.
On page four we have “Helena Blavatsky: Knowledge Comes in Visions”.
Page five presents part two and conclusion of Francis Hutcheson’s text “Determinations of the Will: Concerning the Ultimate Determinations of the Will, and of Benevolent Affections”.
On page nine, an invitation to read “The Prehistory of an Independent Lodge: The Blavatskian View of the Theosophical Movement, From the 1890s to the Decade of 2020”.
These are other topics in the November Aquarian:
* The Psychology of Occult Perceptions – 02 (Concluded): a Selection of Passages From The Essay ‘Occult or Exact Science?’, by H. P. Blavatsky; and
* Thoughts Along the Road: The Truth is Before Us. Who Wants to Know the Truth?
With 21 pages, the edition contains the List of New Items in the associated websites.
Click Here to Read
“The Aquarian” for November 2022
000
The above edition of The Aquarian was published on 06 November 2022. The entire collection of the journal is available HERE.
000
Give your friends a practical tool to better understand themselves and the world. Invite them to join the study-group E-Theosophy in Google Groups.
000