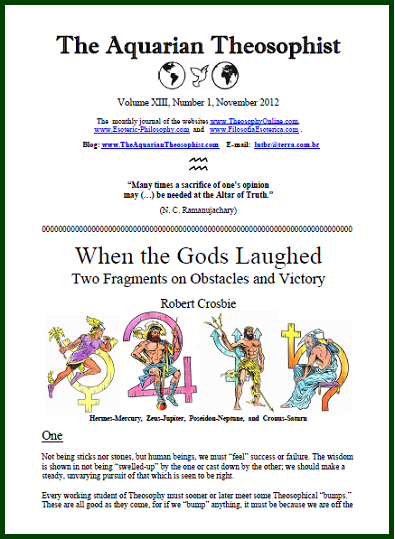 In the first article, “When the Gods Laughed”, Robert Crosbie shows us that there is much to smile at, as the theosophical effort goes on. It is always good to laugh at our own sufferings, especially after they are overcome; and it is only ignorance that blinds us to the inner happiness present in life.
On page 2, a warning for our readers to save money: in spite of its promising title, a new book about H. P. Blavatsky can hardly be useful except as raw material for recycling paper. On pp. 3-7. Robert Kitto writes from Britain and examines our long way from Aspiration to Initiation. Have we asked ourselves – where the path begins?
“A Sacrifice in the Altar of Truth” is the title of a short, insightful article at p. 8. It is signed by one of the main Adyar Society authors, Dr. N. C. Ramanujachary, who lives in India.
A lesson of timeless wisdom comes to us from ancient Rome, and can be found at pp. 9-10. It is the transcription of a lecture delivered by Musonius Rufus, on the reasons to disdain the hardships one must face. Musonius was Epictetus’ Master.
From the United States, Steven H. Levy, a long-time associate of the United Lodge of Theosophists, writes about the silent, decisive work of bringing the truths of Theosophy to the greatest number of persons. (Pages 11-12.)
On pages 13-16, we have two transcriptions of radio talks by Albert Einstein on the Jewish people. The first address was made in 1939, as the Holocaust was about to begin. The second radio talk took place in 1949, shortly after the creation of the State of Israel. Einstein’s words give us glimpses of one of the main tragedies in recent centuries: anti-semitism. He also points out the solution: friendship and mutual help between Arabs and Jews, as part of a wider brotherhood among all nations. The November edition includes a couple of inspiring quotations from an Indian theosophist, Mr.  B. P. Wadia.
Click here to see the November 2012
edition of “The Aquarian Theosophist”
000
You can find the entire collection of “The Aquarian Theosophist” in our associated websites.
000
On the role of the esoteric movement in the ethical awakening of mankind during the 21st century, see the book “The Fire and Light of Theosophical Literature”, by Carlos Cardoso Aveline.