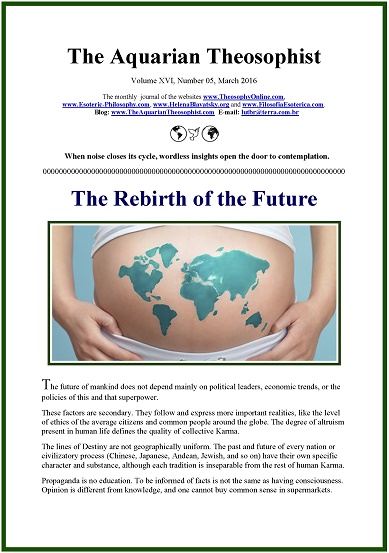 The opening thought of the March 2016 edition says:
“When noise closes its cycle, wordless insights open the door to contemplation.”
On page one the reader sees “The Rebirth of the Future”, followed on page two by  “The Energy of the New Cycle: Right Action, in the Right Timing”.
Page three presents “Karmic Fever and Transcendence”. On page four, “A Blunt Letter to a Student: On Training Oneself in Firmness”.  On page five, “The Tempest and the Teapot”.
On pages 6 and 7, “The Aquarian” publishes a fragment from Donald J. Trump entitled “Give Your Higher Self a Chance: We All Have Something Unique to Offer”.  The note “A Few Words From Democrates” is on page 8.
Other topics in the March edition include:
* The Art of Taking Notes;
* An Invisible Accumulation of Karma;
* Developing an Accurate View  ;
* Thoughts Along the Road;
* Two Poems by Ella Wheeler Wilcox; and
* A List of U.L.T. Lodges.
The 18 pp. edition concludes with the list of new texts in our websites.
Click Here to Read
“The Aquarian”, March 2016
000
You can find the entire collection of “The Aquarian Theosophist” in our associated websites.
000
On the role of the esoteric movement in the ethical awakening of mankind during the 21st century, see the book “The Fire and Light of Theosophical Literature”, by Carlos Cardoso Aveline.