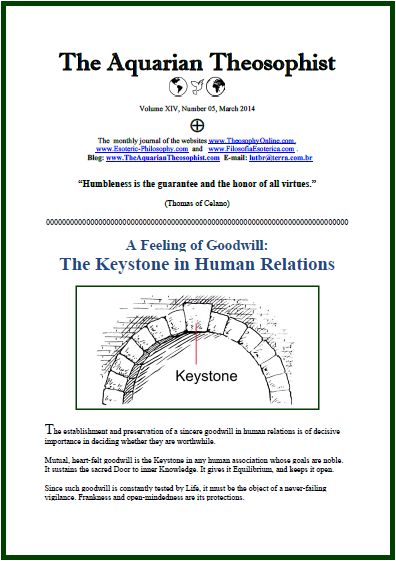 The opening sentence of “The Aquarian” says:
“Humbleness is the guarantee and the honor of all virtues.”
On the front cover we have a note on the fact that  the feeling of goodwill is the keystone in human relations.
On p. 2 a note entitles “The Transcendent Beauty of Truth”. Then follow the texts “To Enter the Path”, “Karma and Bliss”, and “On Asking Ourselves ‘Why’, a Recurrent Issue on Universal Cycles”.
Other topics in the March edition are:
*On Action and Quietness;
*The Magic of the Moon;
*The Instantaneous and the Eternal;
*Theosophical Action on Facebook;
*A Time for Awakening;
*Vigilance, Peace and Concentration;
*One’s Way to Look at Problems Must Contain the Seeds of Their Solution;
*Eisenhower Denounces The Industrial Military Complex;
*A Time to Contemplate the Oneness: Justice to Judge in 2014;
*The Legacy of William Q. Judge, by Steven H. Levy, M.D.;
*Silence and Bliss in Life;
*A Page in The Secret Doctrine: The Advice That HPB Did Not Follow;
*Radha Burnier: Obstacles and Bliss;
*HPB, On Following a Noble Ideal;
The 19 pp. edition includes the List of New Texts in www.TheosophyOnline.com and its associated websites.
Click here to see the March 2014
edition of “The Aquarian Theosophist”
000
You can find the entire collection of “The Aquarian Theosophist” in our associated websites.
000
On the role of the esoteric movement in the ethical awakening of mankind during the 21st century, see the book “The Fire and Light of Theosophical Literature”, by Carlos Cardoso Aveline.