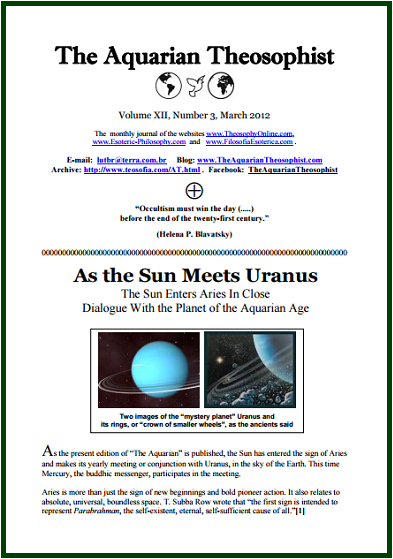 March edition opens with a text on the conjunction taking place right now of the Sun with Uranus, and which is setting the tone for the astrological year of 2012-2013.
This “Aquarian” publishes a significant article by Dr. N. C. Ramanujachary, the vice-president of the Adyar Society in India, who writes about H.P. Blavatsky. Steve Levy, of the ULT in the United States, shows the importance of the example given by William Judge. The president of Israel, Shimon Peres, sends a message of peace to the citizens of Iran, while a Sufi story shows the way to get rid of fear and attachment to possessions. John Garrigues, one of the main founders of the United Lodge of Theosophists in 1909, writes about the first step to take along the path; and there is more to read, in this edition.
Click here to see the March 2012
edition of “The Aquarian Theosophist”
000
You can find the entire collection of “The Aquarian Theosophist” in our associated websites.
000
On the role of the esoteric movement in the ethical awakening of mankind during the 21st century, see the book “The Fire and Light of Theosophical Literature”, by Carlos Cardoso Aveline.