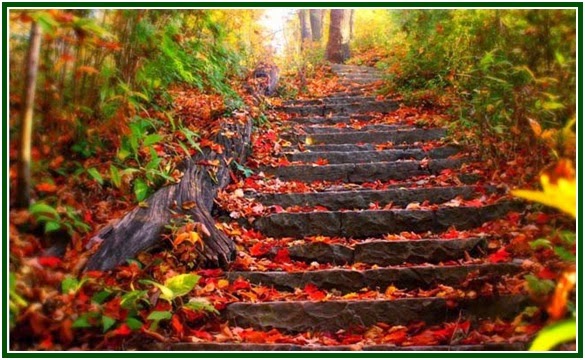 In the months leading to winter, many a tree
loses its leaves, which will be born again in due time
Written teachings of Theosophy often say renunciation is of the essence along the path to wisdom.  That does not mean renunciation can only take place when it is entirely voluntary. It seldom is, in fact.
Most of the time, classical universal teachings about renunciation and detachment serve but to teach the student a much more modest ability. They enable him to understand and accept his unavoidable losses, and to get gradually rid of his several unnecessary attachments. These often constitute a major source of pain in one’s life.
The student does not need to “renounce” things, therefore. Things can “renounce” him in the first place.  Non-essentials in life will lose their attractiveness as soon as one awakens to the theosophical path. The Jnaneshvari explains:
“The dispassionate man cannot be entangled in physical existence or the conditions of worldly life, as the wind cannot be caught in a net. His desire grows weak, as when a fruit is ripe, stem and fruit part from each other.”
And, a few lines later:
“Then every desire for worldly or heavenly enjoyment come to an end, as smoke vanishes when a fire is extinguished with ashes. With the mind under control, desire dies away and he reaches the condition of self-restraint. As a result of this, false knowledge disappears and the Self gains the power of true perception.” [1]
Sunrise and sunset are actually simultaneous. They occur at the same time in different places, and the same simultaneity of different events takes place in the two occult hemispheres of human consciousness. The sunset of one’s lower self is the sunrise of the higher self, and of wisdom.  While renouncing or “being renounced” by things and situations, one gets ready to acquire an impersonal strength which does not “belong” to one’s higher self, but is natural to that level of life where the higher self exists. By learning detachment – the lesson taught by autumn – one gets access to winter, the season which presides over the culmination of  Nivritti Marga, the path of decreasing materiality inaugurated by autumn.  Winter teaches humbleness, resolve, perseverance, transcendence. And it is the father of springtime.
With spring comes the art of renewing oneself and being born again, through right action.  Then summer emerges to teach us strength, and self-confidence.  To the wise, however, the summer also teaches modesty and selflessness, for they can see the whole cycle and know that soon summer will invite autumn to test once more our resolve and determination.
Possessions belong to the world of fear and suffering, while Renunciation leads to the prosperity of one’s spiritual soul. French thinker Ernest Renan, who adopted the classical ideal of poverty lived by Francis of Assisi, wrote this in the 19th century:
“I crossed the world in the same way as the patriarch of Assisi, without getting strongly attached to the world and – I dare say – as a simple tenant. Both of us, though having no possessions, are rich. Divinity gave us usufruct rights over the universe, and we are content to enjoy it without ownership.” [2]
This is the path of theosophy, and each one must decide for himself as to the rhythm of the progress to be made along the road.
NOTES:
[1] “Jnaneshvari”, written by Shri Jnaneshvar, translated from the Marathi by V.G. Pradhan, State University of New York Press, 1987, 652 pp., copyright UNESCO 1969. See p. 596, paragraphs 951, 952, 957, 958, and 959.
[2] “Nouvelles Études D’Histoire Religieuse”, Ernest Renan, 1884, Calmann-Lévy, Editeurs; 533 pp., see pp. III-IV.
000
The above text was first published in “The Aquarian Theosophist”, September 2012 edition. It had no indication as to the name of the author.
000
On the role of the esoteric movement in the ethical awakening of mankind during the 21st century, see the book “The Fire and Light of Theosophical Literature”, by Carlos Cardoso Aveline.