A Legend That Is Alive to This Day
Helena P. Blavatsky 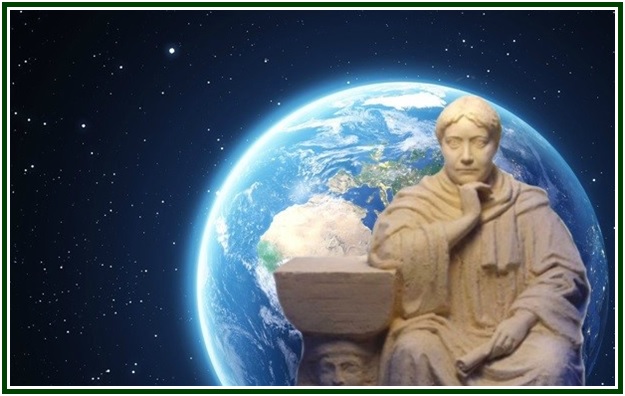 A statue of Helena Blavatsky, made by Ukrainian
artist Alexey Leonov, with our planet in the background
Editorial Note:
Mr. T. Subba Row’s short life constitutes a unique example of how an advanced learner of esoteric wisdom can be defeated by national prejudice and personal pride.
Soon after joining the theosophical movement, the young, unexperienced Subba Row started making polemics and challenging Helena P. Blavatsky. Purporting to know more than she did about esoteric matters, he refused to fully cooperate with the theosophical project, as one can see in “The Mahatma Letters”.  It was by this time, not long before leaving the movement, that Subba Row wrote the brilliant article “The Aryan-Arhat Esoteric Tenets on the Sevenfold Principle in Man”.
In the article, a message personally addressed to HPB and published by “The Theosophist” in January 1882, he says:
“…The real esoteric doctrine as well as the mystic allegorical philosophy of the Vedas were derived (…) perchance, from the divine inhabitants-gods of the sacred Island which, as you say, once existed in the sea that covered in days of old the sandy tract now called Gobi Desert. However that may be, the knowledge of the occult powers of nature possessed by the inhabitants of the lost Atlantis was learnt by the ancient adepts of India and was appended by them to the esoteric doctrine taught by the residents of the sacred Island.”
To this, Blavatsky, then the editor of the “Theosophist”, added a footnote saying:
“A locality which is spoken of to this day by the Tibetans and called by them ‘Shambhala’, the Happy Land. See Appendix, Note III.” [1]
The following paragraphs reproduce “Note III”, by H.P.B., on the Sacred Island.
(Carlos Cardoso Aveline)
000
On the Island of Shambhala
Helena P. Blavatsky
To ascertain such disputed questions, one has to look into and study well the Chinese sacred and historical records – a people whose era begins nearly 4,600 years back (2697 B.C.). A people so accurate and by whom some of the most important inventions of modern Europe and its so much boasted modern science were anticipated – such as the compass, gunpowder, porcelain, paper, printing, etc., known, and practiced thousands of years before these were re-discovered by the Europeans – ought to receive some trust for their records. And from Lao-tze down to Hiuen-Tsang their literature is filled with allusions and references to that island and the wisdom of the Himalayan adepts.
In A Catena of Buddhist Scriptures from the Chinese, by the Rev. Samuel Beal, there is a chapter “On the Tian-Ta’i School of Buddhism” (pp. 244-258) which our opponents ought to read. Translating the rules of that most celebrated and holy school and sect in China founded by Chinche-K’hae, called Che-chay (the wise one) in the year 575 of our era, when coming to the sentence which reads: “That which relates to the one garment [seamless] worn by the GREAT TEACHERS OF THE SNOWY MOUNTAINS (the school of the Haimavatas)” (p. 256) the European translator places after the last sentence a sign of interrogation, as well he may. The statistics of the school of the “Haimavatas” or of our Himalayan Brotherhood, are not to be found in the General Census Records of India. Further, Mr. Beal translates a Rule relating to “the great professors of the higher order, who live in mountain depths remote from men”, the Aranyakas, or hermits.
So, with respect to the traditions concerning this island, and apart from the (to them) historical records of this preserved in the Chinese and Tibetan Sacred Books: the legend is alive to this day among the people of Tibet. The fair Island is no more, but the country where it once bloomed remains there still, and the spot is well known to some of the “great teachers of the snowy mountains”, however much convulsed and changed its topography by the awful cataclysm.
Every seventh year, these teachers are believed to assemble in Shambhala, the “happy land.” According to the general belief it is situated in the North-West of Tibet. Some place it within the unexplored central regions, inaccessible even to the fearless nomadic tribes; others hem it in between the range of the Gangdisri Mountains and the northern edge of the Gobi Desert, South and North, and the more populated regions of Kunduz and Kashmir, of the Gya-Pheling (British India), and China, West and East, which affords to the curious mind a pretty large latitude to locate it in. Others still place it between Namur-Nor and the Kuen-Lun Mountains – but one and all firmly believe in Shambhala, and speak of it as a fertile, fairylike land, once an island, now an oasis of incomparable beauty, the place of meeting of the inheritors of the esoteric wisdom of the godlike inhabitants of the legendary Island.
In connection with the archaic legend of the Asian Sea and the Atlantic Continent, is it not profitable to note a fact known to all modern geologists – that the Himalayan slopes afford geological proof, that the substance of those lofty peaks was once a part of an ocean floor?
NOTE:
[1] The article “The Aryan-Arhat Esoteric Tenets on the Sevenfold Principle in Man” and the HPB Notes to it can be found in the volume III of the “Collected Writings” of H.P.B. See p. 402 for her footnote reproduced above, and pp. 420-422 for “Note III”.  The article and her Notes are also at the book “Esoteric Writings”, by T. Subba Row. Click to see it in one of our associated websites.
000
The above text is reproduced from “The Aquarian Theosophist”, April 2018, pp. 1-3.
“On the Island of Shambhala” was published in our associated websites as an independent article on 25 January 2019.
000