The Destiny of Our Globe, And
The Effective Way to Reform It
Carlos Cardoso Aveline 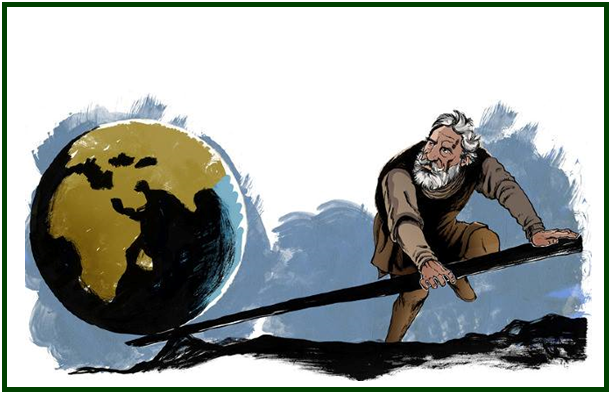 “Give me a lever long enough and a
place to stand, and I will move the world.”
(Archimedes 230 B.C.E.)
It is always easy and nice in the short term to focus our minds in that which we think is wrong about the others, and about the world.
Discussing whatever is not right around ourselves provides us with a sense that we are right, and that we are powerful, and clever. It takes aside that uncomfortable perception that perhaps we are not doing everything we can to live correctly. It is as if we had an alibi to postpone self-reform. We say to ourselves:
“The world, or this, or that situation, is in such a bad condition that I must reform the world first, and change this and that situation before I can reform myself.”
The reasoning is false because my self is precisely the part of the universe which – being connected with every other part – is my duty to take care of in the first place, and reform if necessary.
The purpose of identifying mistakes around us is but to prevent ourselves and others from unnecessarily imitating Error.
True compassion and self-sacrifice are present in sincere attempts to reform the outer world. However, effectiveness in such efforts depends on applying the principles of intelligent action and energy conservation.
We must change the decisive aspects of reality, not the secondary ones. We have to act on that which depends on us. Thus, we must start by changing our own lives. If we want “a lever to change the world”, the lever is – ourselves. The first task is giving a clear direction each day to our own thoughts, emotions and actions, and to teach others mainly by example.
The citizens of good-will are karmically co-responsible for the future of the Earth. Our planet is destined to live by the principle of universal brotherhood. There is no need to worry about the time necessary for that, for theosophy teaches us a long-term view of life. The birth of the future often takes place by profound crises and cataclysms, and human spirit must rise to the occasion.
Responsibility is individual. According to tradition, the famous Greek mathematician Archimedes said over two thousand years ago:
“Give me a lever long enough and a place to stand, and I will move the world.”
In the 21st century, one can use the creative power of thought to improve the psychic and noetic atmosphere of our globe. French philosopher Maine de Biran was correct in writing that “no one thinks of the obvious”.
One obvious fact is that each citizen has in himself the Lever of Archimedes. From a practical viewpoint, the global lever is the altruistic will of each individual.
The place to stand is his own higher self. The time of the action is right now; however, it also includes several incarnations.
No individual is alone in the effort. Each good-willing and self-responsible citizen is a unique creative center in the universe of mankind’s good karma.
000
The above article combines the ideas present in two notes published with no indication as to the name of the author. One of them appeared at “The Aquarian Theosophist”, September 2012 edition, pp. 3-4. It had the title of “A Lever to Change the World”. The other one was published at the March 2013 edition of the same journal, pp. 8-9, under the title of “Using the Creative Power of Thought”.
000
See in our associated websites the articles “Pascal’s Sphere” (by Jorge Luis Borges), “The Center of Pascal’s Sphere” (by Carlos Cardoso Aveline), “The Tree of Universal Brotherhood” (by Helena Blavatsky), “Meditation on the Awakening of Mankind”, “The Power to Change the World” and “Meditating on Peace in the Middle East”.
000
In September 2016, after a careful analysis of the state of the esoteric movement worldwide, a group of students decided to form the Independent Lodge of Theosophists. Two of the priorities adopted by the ILT are learning from the past and building a better future.
000