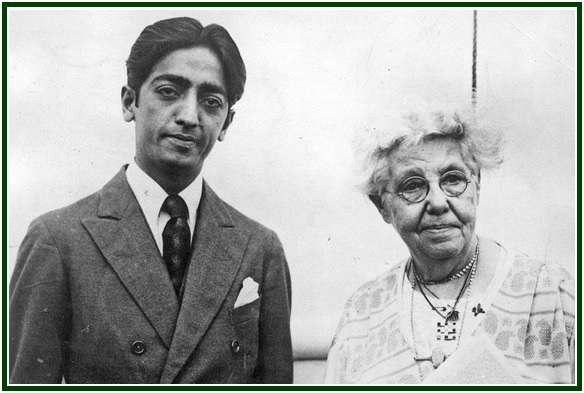 The pseudo-theosophical “Lord Christ” and Mrs. Annie Besant in 1926,
three years before he finally closed the comedy by leaving the Theosophical Society.
Jiddu Krishnamurti was carefully educated by Annie Besant and Charles Leadbeater to play the role of “Lord Christ”.  They were rather obsessive about that.[1]
As an adult, however, Krishnamurti rejected their teachings altogether and never developed an interest in their variety of pseudo-theosophy. He also did not pay attention to the original theosophy or classical wisdom, preferring instead to become a new age thinker on his own terms.
Among his ardent followers was Professor P. Krishna, a nephew of the former leader of the Adyar Society Radha Burnier (1923-2013).  P. Krishna once told a dialogue that Krishnamurti had with a friend, on the education he received from Mr. Leadbeater and Mrs. Besant.
Calling Krishnamurti “Krishnaji”, P. Krishna writes:
“A man once told Krishnaji that he was very lucky to have been brought up in the Theosophical Society with teachers like CWL [Leadbeater] and Mrs. Besant, and he said: ‘Yes, I was very fortunate to have teachers like them.’ Then the man said, ‘We are not so lucky, we are going through ordinary institutions. How can we come upon truth?’ And he responded: ‘Sir, I was lucky because whatever they told me went into one ear and out of the other’.” [2]
This seems to be in short sentences Jiddu Krishnamurti’s true assessment of Besant’s philosophy and of its influence on him.  While P. Krishna develops in his article an artificial and “politically correct” interpretation of Krishnamurti’s words, it has no interest to us here. Krishnamurti could speak for himself. His own sentences were clear enough. He knew what he was talking about. His words on education were the tip of an iceberg he wanted to keep hidden under the surface the waters. He did not have any admiration for the pseudo-Christian fraud fabricated by the leaders of Adyar Society.
Mass at the Liberal Catholic Church
In her well-documented book “Krishnamurti, The Years of Awakening” [3], British author Mary Lutyens transcribes part of a 1922 letter written by Jiddu Krishnamurti to his intimate friend Lady Emily.
The fragment shows how afraid Krishnamurti was of showing in public what he really thought of the theosophical leaders and priests like C.W. Leadbeater, whom he considered “fools anyway”.
Krishnamurti attended a Mass of the Liberal Catholic Church which was said by C. W. Leadbeater himself.
At the time, Krishnamurti was being trained to play the role of Lord Christ in the tragic comedy of the “Return of the Lord”,  directed by C.W.L. and Annie Besant. The parody only ended when the “avatar” left the Adyar Society for good in 1929.
In his letter to Lady Emily (Mary Lutyens’ mother), Krishnamurti has this to say from Sidney, Australia:
“Sunday morning [4] I went to the Liberal Catholic Church & C. W. Leadbeater was the acting priest. He did it all very well but you know I am not a ceremonialist & I do not appreciate all the paraphernalia with all those prayers & bobbing up & down, the robes etc.; but I am not going to attack it, some people like to do so what right have I to attack or disapprove of it? The church lasted 2 and a half hours and I was so bored that I was nearly fainting. I am afraid I rather showed it. I must be careful or else they will misunderstand me & there will be trouble. They are like cats & dogs over this church affair. They are fools anyway. Their over-zealousness & the lack of tact is the cause of trouble here.”
Mary Lutyens adds that “Krishnamurti’s attitude to the Church” was expressed in the above words.
Unfortunately at that time he was too timid to be able to speak his mind and make a clear declaration of principles. In fact, he did maintain the worse than useless parody of the Liberal Catholic Christ for seven years more – up to August 1929.
NOTES:
[1] See the article “The Making of an Avatar” by Carlos Cardoso Aveline, which is available at our associated websites.
[2] “Krishnamurti As I Knew Him”, an article by P. Krishna, Rector, Rajghat Education Centre, Krishnamurti Foundation India, Varanasi 221001, India. The text was first published in the May 1997 issue of “The Theosophist”, Chennai, India. Written by Prof. P. Krishna, it is based on a talk he gave in November 1996 at Adyar Lodge, Madras, India.
[3] “Krishnamurti, The Years of Awakening”, by Mary Lutyens, published by Farrar, Straus and Giroux, New York, 1975, 326 pp., see p. 142.
[4] Id est, 18 April 1922.
000
The above article combines the contents of two short notes anonymously published by “The Aquarian Theosophist” in its editions of September 2013 and February 2014. The first one was entitled “Jiddu Krishnamurti, On His Education”. The second one, “Mass at the Liberal Catholic Church”.
See also the article “Krishnamurti and Theosophy”, which is available in our associated websites.
000
In September 2016, after a careful analysis of the state of the esoteric movement worldwide, a group of students decided to form the Independent Lodge of Theosophists, whose priorities include the building of a better future in the different dimensions of life.
000