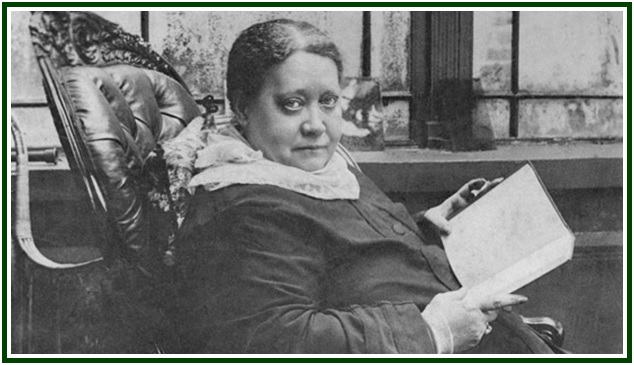 H.P.B. in her office, in 1887
00000000000000000000000000000000000000000000000
Editorial Note:
The following article was first published
anonymously  at “Theosophy” magazine, in May
1922, pp. 197-198. An analysis of its contents and style
indicates it was written by J. Garrigues. The original title
of the text was:  “Not So Far-Off As Some May
Think”. We have added the opening quotation.
(Carlos Cardoso Aveline)
00000000000000000000000000000000000000000000000000000
“Thou grievest for those that
may not be lamented (…..). Those
who are wise in spiritual things grieve
neither for the dead nor for the living.
I myself never was not, nor thou, nor
all the princes of the earth; nor shall we
ever cease to  be. (…) For the wise man
(…) is fitted for immortality. There is no
existence for that which does not exist, nor is
there any non-existence for what exists.”
From the second chapter of
the book The Bhagavad-Gita [1]
When H.P. Blavatsky and W. Q. Judge seemed to die as kings die, as beggars die or flowers die, the students repeated again for the thousandth time the oft tongued words of the second chapter of The Bhagavad Gita. But there is this saying: that unless the true meaning of a teaching is understood, however eternally true, it is for the repeater no more than “a song of little meaning though the words be strong”.
Who in fact saw the Teacher’s “death” as They knew death? Yes, there was the body, dead like any other.  “Pass on to thy reward, O Lanoo, we shall meet again”, some said; truly the Teacher was dead, to them.
Yet many a time H.P.B.’s body had been stretched in sleep. Where then was the real H.P.B.? “I, that is to say, my body, will be quietly asleep in my bed ….. God’s light would be absent from it, flying to you; and then it would fly back and once more the temple would get illuminated by the presence of the Deity” [2], as She wrote from  America to a relative in referring to a fully conscious visit to  distant Russia while the  Madame Blavatsky was quietly asleep. At another time She said: “My nights are my manvantaras”.  We have not bridged death and sleep; it is no gulf to Them.
On May 8 [1891], the body again was still, not in sleep, but for the last time. Where was H.P.B.? Where was the Mighty Wisdom, the vast intelligence, the veritable living Secret Doctrine? Where was the boundless love for all mankind?
Extinguished, unconscious, snug in some sound-proof heaven where cannot penetrate the cries from this hell which men call earth? Held in some far-off loka, to be met again only after thousands of years have dragged their weary course? To those ever working to be the head of this or that, and who seek not nor feel for the Heart, it might very well be.
Of the many hints written by the Source of all our knowledge and of all our strength for this work, this is one:
“If anyone has by such study gained (Yogi) powers, he cannot remain long in the world without losing the greater part of his powers – and that the  higher and nobler part. So that, if any such person is seen for many consecutive years laboring in public, and neither for money nor fame, it should be known that he is sacrificing himself for the good of his fellow-men. Some day such men seem to suddenly die, and their supposed remains are disposed of; but yet they may not be dead. ‘Appearances are deceitful’, the proverb says.” [3]
Thousands can live quite comfortably, even delightedly, with Theosophy as a mental possession, but the hourly and daily application of it – the spreading of it along the Lines Laid Down by Those who created it, preserved and regenerated it – means the going on a path which none would or could enter or continue on, but for these Friends and Teachers of Old Time and of the Future.
These Great Beings the sincere student must come to feel and to know as not dead nor in some distant retreat, but ever near and ever potent like the magic of some resistless power, as a mighty rushing river. As he wholly trusts Them and works on, studying, applying, spreading the Teachings They wrote for him, he must inevitably come to fully understand.
NOTES:
[1] “The Bhagavad-Gita”, From the Sanskrit by William Q. Judge, Theosophy Company, Los Angeles, USA, and Bombay, India; 1986, 133 pp., see Chapter II, pp. 11-12. (CCA)
[2] From “The ‘Judge’ Letters of H.P.Blavatsky”, Chapter II. The compilation is available at our associated websites.  (CCA)
[3] At this point, a footnote by J. Garrigues says the quotation comes from “A Modern “Panarion”.  It can be seen at H.P. Blavatsky’s text “Questions Answered About Yoga Vidya”, in “A Modern Panarion”, H.P.B., Theosophy Co., Los Angeles, 1981, a facsimile edition of the 1895 edition, 504 pp., p. 360.  The text was originally published at “The Theosophist”, December 1880, p. 47.  (CCA)
000
In September 2016, after a careful analysis of the state of the esoteric movement worldwide, a group of students decided to form the Independent Lodge of Theosophists, whose priorities include the building of a better future in the different dimensions of life.
000