Entire Nations Are Under Hypnotism, a
Fact That Citizens Can Confirm, and Unmask
Carlos Cardoso Aveline 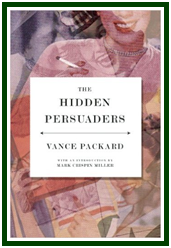 Readers will find a more recent edition of “The Hidden Persuaders”, by Vance Packard. Published in 2007 with 240 pages, it has an Introduction by Mark Crispin Miller and was printed by Ig Publishing, New York.
Another interesting book is “The Persuaders”, by James Garvey. Its subtitle is “The Hidden Industry that Wants to Change Your Mind”. It was published in the UK by Icon Books Ltd in 2016, and has 288 pages.
000
On the role of the esoteric movement in the ethical awakening of mankind during the 21st century, see the book “The Fire and Light of Theosophical Literature”, by Carlos Cardoso Aveline.