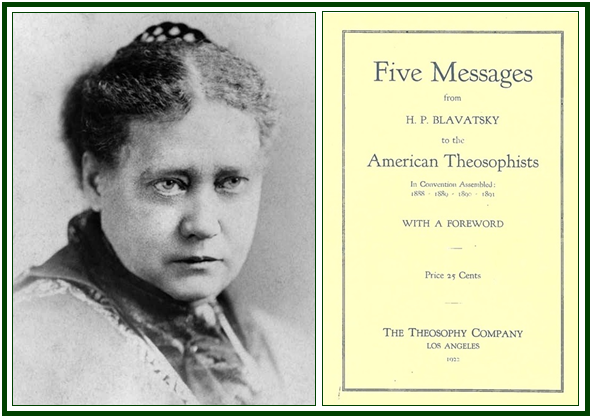 Helena Blavatsky (left) and the front cover of the 1922 edition, with 32 pp.
The Foreword of the 1922 Edition
In reprinting these five Letters of H. P. Blavatsky, addressed to American Theosophists in 1888, 1889, 1890, and 1891, the Publishers beg to draw the attention of the reader to the very instructive application, made by the author, of Theosophical truths to the peculiar conditions of our American civilization. H. P. Blavatsky understood America because she loved America. In one of the Letters she writes: “Your great country which I love for its noble freedom …. and of which country I myself am proud of being a citizen.”
(….)
Click Here to Read the Complete
Pamphlet “Five Messages”, in PDF
000
Date of the present online edition of “Five Messages”:  May 2014.
000
In September 2016, after a careful analysis of the state of the esoteric movement worldwide, a group of students decided to form the Independent Lodge of Theosophists, whose priorities include the building of a better future in the different dimensions of life.
000