Two Letters to Ms. Radha
Burnier, and One Letter from Her
Carlos Cardoso Aveline 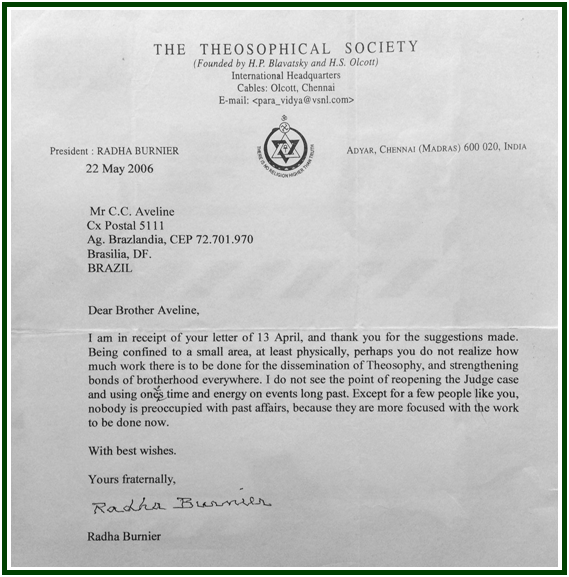 Facsimile of the 2006 letter
00000000000000000000000000000000000000000000
A 2016  Editorial Note:
The following correspondence is part of a
chain of  open letters to the president of the  Adyar
Theosophical Society, sent between 2006 and 2013.
We reproduce here two letters written from Brazil
to India, in April and June 2006. The second of them
transcribes one  letter from Radha Burnier (1923-2013).
At the end of the present documents, the facsimile
of a 1999 Letter from Radha to Geoffrey Farthing
is shown as an illustration of her usual approach
to those who unmask pseudo-theosophical delusions.
Even in a movement whose motto is “there is
no religion higher than truth”, political power
and corporate interests drastically reduce people’s
interest in the truth of the facts, and their respect for it.
(CCA)
00000000000000000000000000000000000000000000000000000000
I – The First Letter in April 2006
Mrs. Radha Burnier
President, The Theosophical Society,
Adyar, Chennai 600 020 India
Brasília, Brazil, 13 April 2006.
Dear Mrs. Radha,
This is to respectfully suggest that the Theosophical Society, Adyar, might re-examine the documents referring to the process started by Annie Besant and Henry Olcott against William Judge in the 1890s – and either show proofs of Judge’s guilt, or declare him innocent.
Click Here to Read
“Corresponding With Radha, On Ethics”, in PDF
000
In September 2016, after a careful analysis of the state of the esoteric movement worldwide, a group of students decided to form the Independent Lodge of Theosophists, whose priorities include the building of a better future in the different dimensions of life.
000
E-Theosophy e-group offers a regular study of the classic, intercultural theosophy taught by Helena P. Blavatsky (photo).