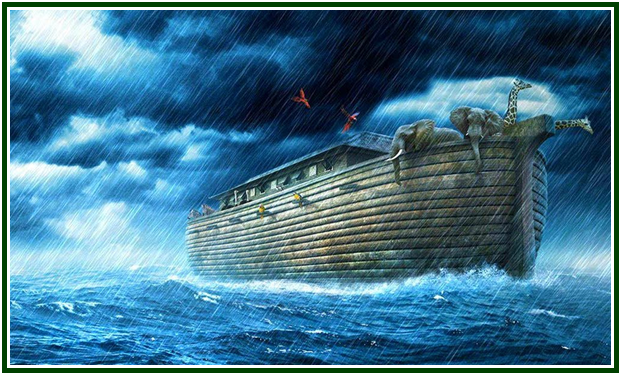 The “Deluge” is undeniably an universal tradition. “Glacial periods” were numerous, and so were the “Deluges”, for various reasons.
Stockwell and Croll enumerate some half dozen Glacial Periods and subsequent Deluges – the earliest of all being dated by them 850,000, and the last about 100,000 years ago. [1]
But which was our Deluge? Assuredly the former, the one which to this date remains recorded in the traditions of all the peoples, from the remotest antiquity; the one that finally swept away the last peninsulas of Atlantis, beginning with Ruta and Daitya and ending with the (comparatively) small island mentioned by Plato. This is shown by the agreement of certain details in all the legends. It was the last of its gigantic character.
The little deluge, the traces of which Baron Bunsen found in Central Asia, and which he places at about 10,000 years B.C., had nothing to do with either the semi-universal Deluge, or Noah’s flood – the latter being a purely mythical rendering of old traditions – nor even with the submersion of the last Atlantean island; at least, only a moral connection.
Our Fifth Race [2] (the non-initiated portions), hearing of many deluges, confused them, and now know of but one. This one altered the whole aspect of the globe in its interchange and shifting of land and sea.
We may compare the traditions of the Peruvians: “The Incas, seven in number, have repeopled the Earth after the deluge”, they say (Coste I, IV., p. 19); Humboldt mentions the Mexican version of the same legend, but confuses somewhat the details of the still-preserved legend concerning the American Noah. Nevertheless, the eminent Naturalist mentions twice seven companions and the divine bird which preceded the boat of the Aztecs, and thus makes fifteen elect instead of the seven and the fourteen.
This was written probably under some involuntary reminiscence of Moses, who is said to have mentioned fifteen grandsons of Noah, who escaped with their grandsire.
Then again Xisuthrus, the Chaldean Noah, is saved and translated alive to heaven – like Enoch – with the seven gods, the Kabirim, or the seven divine Titans; again the Chinese Yao has seven figures which sail with him and which he will animate when he lands, and use for “human seed”. Osiris, when he enters the ark, or solar boat, takes seven Rays with him, etc., etc.
NOTES:
[1] NOTE BY HPB: “Smithsonian Contributions to Knowledge”, xviii.; “American Journal of Science”, III., xi., 456; and Croll’s “Climate and Time”. Lemuria was not submerged by a flood, but was destroyed by volcanic action, and afterwards sank.
[2] “Races” in theosophy transcend colour of skin or nationality or social position. Fifth Race is basically our present humanity, including people of all “races”; it is rather a long term phase in human evolution. And in theosophy people of all races are equal in right, of course, and brothers and sisters. (CCA)
000
The above text is reproduced from “The Aquarian Theosophist”, February  2014 edition. It was originally published as part of “The Secret Doctrine”, by H. P. Blavatsky, Theosophy Co., Los Angeles. See vol. II, p. 141.
000
Read also the text “Al Gore, Theosophy and the Cycle”, by Carlos Cardoso Aveline. The article is published in our associated websites.
000
In September 2016, after a careful analysis of the state of the esoteric movement worldwide, a group of students decided to form the Independent Lodge of Theosophists, whose priorities include the building of a better future in the different dimensions of life.
000
E-Theosophy e-group offers a regular study of the classic, intercultural theosophy taught by Helena P. Blavatsky (photo).