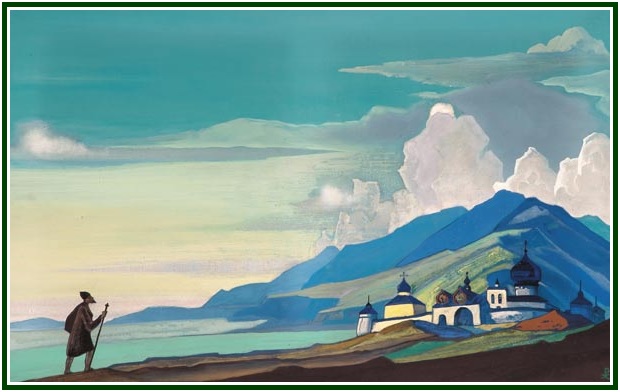 A painting by N. Roerich
Many a candidate to guru in theosophy quietly spreads the idea that an unquestioning idealization of one’s teacher is part of the path to truth. In fact, it is part of the road to illusion.
One of the two Mahatmas whose teachings guide the authentic theosophical movement wrote about that. He clarified the issue in these words:
“A chela under probation is allowed to think and do whatever he likes. He is warned and told beforehand: you will be tempted and deceived by appearances; two paths will be open before you, both leading to the goal you are trying to attain; one easy, and that will lead you more rapidly to the fulfilment of orders you may receive; the other – more arduous, more long; a path full of stones and thorns that will make you stumble more than once on your way; and, at the end of which you may, perhaps, find failure after all and be unable to carry out the orders given for some particular small work, – but, whereas the latter will cause the hardships you have undergone on it to be all carried to the side of your credit in the long run, the former, the easy path, can offer you but a momentary gratification, an easy fulfilment of the task.”
He also said:
“The chela is at perfect liberty, and often quite justified from the standpoint of appearances – to suspect his Guru of being ‘a fraud’ as the elegant word stands. More than that: the greater, the sincerer his indignation – whether expressed in words or boiling in his heart – the more fit he is, the better qualified to become an adept.”
Referring to the disciple, the Master wrote:
“He is free to [use], and will not be held to account for using the most abusive words and expressions regarding his guru’s actions and orders, provided he comes out victorious from the fiery ordeal; provided he resists all and every temptation; rejects every allurement, and proves that nothing, not even the promise of that which he holds dearer than life, of that most precious boon, his future adeptship – is unable to make him deviate from the path of truth and honesty, or force him to become a deceiver.” [1]
The words from the Master are clear.
Learning theosophy is not about “adopting an attitude”. It depends on gaining a right view of life by self-devised efforts.
One does not learn theosophy by developing “social skills” based on imitation and manipulation of form. One has to renounce these mayavic things in order to have the eyes to see and develop discernment.
Therefore, no true teacher accepts blind followers. Teachers who want their students not to question the teaching are no real teachers. They are deceiving themselves with the fancy of infallibility, and deceiving their students.
The masters of the wisdom examined the issue in their Letters: their pedagogy relies on the independence of each learner, not on his “loyalty” to dead letter or to personalities.
NOTE:
[1] The above quotations are made from the article “Two Schools of Occultism”, by a Mahatma of the Himalayas, which is available in our associated websites.  The primary source is the Letter 74 in the Chronological edition of “The Mahatma Letters” (TPH, Philippines), or Letter XXX, in TUP edition, Pasadena.
000
On the role of the esoteric movement in the ethical awakening of mankind during the 21st century, see the book “The Fire and Light of Theosophical Literature”, by Carlos Cardoso Aveline.