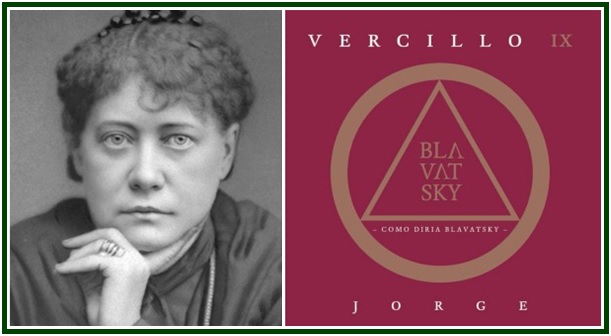 Helena Blavatsky’s portrait, and the cover of Vercillo’s CD “Como Diria Blavatsky”
000000000000000000000000000000000000000000
An Editorial Note
We translate below from Portuguese the text
of the song “Como Diria Blavatsky” (“As
Blavatsky Would Say”), by Brazilian composer
and singer Jorge Vercillo. It is the main song in
Vercillo’s 2011 CD “Como Diria Blavatsky”.
The musician declared in interviews that
he studies Helena P. Blavatsky’s theosophy.
His song exemplifies the fact that music and
poetry are vehicles for the promulgation of universal
wisdom. “As Blavatsky Would Say” examines the
reincarnation process of a soul whose goal is to fulfill an
altruistic mission. Upon being born, one loses the vision
of the lofty task. It is much later, when he sees the source
of his spiritual inspiration, that he recovers eternal wisdom
and remembers “a time when we knew we are immortal
beings”. The song concludes with optimism, reminding
us that we have reasons to be confident: “And we may
also say, we have time enough for it all.”
(Carlos Cardoso Aveline)
000000000000000000000000000000000000000000000000000000000
I can’t look at myself
Except in the mirror.
It may be because I don’t want to see
Where I come from, or who I am.
Yet – upon seeing you,
I remember a time
A time when humans
Did not enslave animals;
A time when we knew
We are immortal beings.
In the other side of the galaxy
You were my preceptor.
By playing, I prepared myself
For the gold and the suffering of this mission,
Which I chose myself.
And before I “came down” you told me:
“…You won’t know why you are there,
You will not know how to deal
With your power,
You will not know who you are,
Nor where you come from…”
But now, because of something in your eyes,
I have found myself.
You make me remember that we are Gods
Fallen into the third dimension.
It was our choice, then.
And we may also say,
We have time enough for it all –
For it all, for it all.
Click Here to Listen to the Song
“As Blavatsky Would Say”, in Portuguese
000
On the role of the esoteric movement in the ethical awakening of mankind during the 21st century, see the book “The Fire and Light of Theosophical Literature”, by Carlos Cardoso Aveline.