The Theosophical Movement Aims to
Bring a New Kind of Humanity into Being
N. C. Ramanujachary 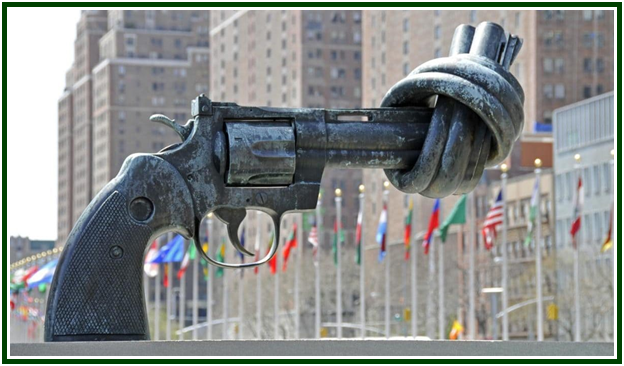 The sculpture “Non-Violence”, in the United Nations
headquarters at New York City, is also known as “the knotted gun”
000000000000000000000000000000000000000000
The following article was first published by
“The Theosophist”, Adyar, India, in its September
1999 edition, pp. 942-943. It was revised by the
author in August 2012,  for the present publication online.
0000000000000000000000000000000000000000000000000000
“Of a piece with human nature, there
soon comes a stage when the shell of the
organization elbows out the guiding philosophy,
though the two must be constantly intertwined.”
By and large, people wish to live in peace and harmony and yet, as many do not know where such qualities can be found, they turn towards a philosophy that suggests reasonably right answers for the doubts that lurk in their minds. Intellectuals as well as the general public are attracted towards the Theosophical Movement and its philosophy, which bases itself on the Oneness of Life and Universal Brotherhood.
While the world is ridden with factions, and fragmented into caste, creed, language and religion, the Theosophical Movement aims to bring a new kind of humanity into being, with a mind embracing the whole universe. When the Movement was formed in 1875, the sole Object projected was “to collect and diffuse a knowledge of the laws which govern the universe”. As this may have been regarded as too abstract and obscure, the Objects were clarified and plans were drawn up in 1879 which read as below:
A) To keep alive in man his spiritual intuitions.
B) To oppose and counteract bigotry in every form, whether as an intolerant religious sectarianism or belief in miracles or anything supernatural.
C) To promote a feeling of brotherhood among nations, and assist in the international exchange of useful arts and products, by advice, information and cooperation with all worthy individuals and associations; provided, however, that no benefit or percentage shall be taken by the theosophical associations for their corporate services…
D) Finally, and chiefly, to encourage and assist individual Fellows in self-improvement, intellectual, moral and spiritual…
The present form of the declared Objects came to be adopted in 1896. Though made into three for the sake of clarity and unambiguous understanding, they are not exclusive but should be perceived as sustaining the whole purpose for which the Movement exists. The Objects are independent and are directed to unfold a new mind, which unerringly realizes that “There is no Law (religion) higher than Truth” – a truth that binds all manifestation into one forever.
For members of the theosophical associations who are spread all over the world, an intellectual attraction to the Movement’s philosophy is the common bond, and they endeavor to make it a part of their everyday life. Some do succumb to the hurdles and obstacles on their way, but others get over them, backed by their deep understanding of the principles of life and the glimpses of a wonderful future obtainable from theosophical study.
Over these more than one hundred years the theosophical associations have placed before the public much literature of philosophical and spiritual value and have helped brighten and enlarge human perspectives in their totality, and probe the mystic character of the universe, which is actualized as a world-view. Members of the associations throughout, have endeavoured to enrich knowledge and experience in all fields of human activity including the arts, sciences and literature.
But organizational interests sometimes override the philosophical side. This results in an individual being technically a member, just toeing formal obligations with no spirit of understanding.
Of a piece with human nature, there soon comes a stage when the shell of the organization elbows out the guiding philosophy, though the two must be constantly intertwined. In any organization, there will be some casual members and some serious enough. Yet it is necessary that the sincere members, though they may not have sufficient energy and time to be fully devoted to the activities of the organization, must be in tune with the core spirit. Sometimes, because of personal or professional preoccupations, a member may not be able to attend all the meetings of his branch, but this may not indicate a basic lack of faith. Regular attendance at meetings helps recharge one’s energies, but one who cannot do so must find other means to tap the regenerative springs and further the aims of the organization.
Helena Blavatsky, the chief Founder of the Theosophical Movement,  listed how members can help the work:
1) Study and comprehension of theosophical doctrines.
2) Talking to others, explaining what Theosophy is and is not, removing misconceptions and enkindling an interest in it.
3) Assisting in circulating theosophical literature.
4) Defending the Movement from unjust aspersions.
5) Setting an example by their own lives.
Elsewhere, she deplores that most members “prefer to remain drones of Theosophy” instead of exerting themselves “to work for the relief of human suffering under any or every form”. All members are to study, if not master, all branches of esoteric philosophy, she says. Every member of the Movement is expected to widen his perspective by a thorough study of the doctrines of theosophical philosophy and work for their dissemination among the lay public. It is only the continued and unremitting work of such votaries that keeps the organizations  and their objects vibrant and pulsating.
000
On the role of the esoteric movement in the ethical awakening of mankind during the 21st century, see the book “The Fire and Light of Theosophical Literature”, by Carlos Cardoso Aveline.