With an Introduction by M. K. “Mahatma” Gandhi
Leo Tolstoy 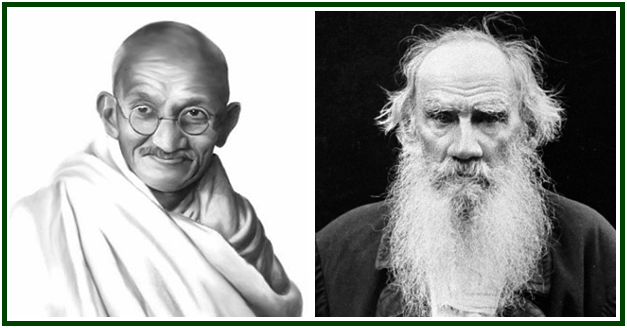 M. K. Gandhi (left) made commentaries on Leo Tolstoy’s “Letter to a Hindu”
000000000000000000000000000000000000
A 2013 Editorial Note:
The 21st century readers will see
that the following document has
many a point in common with modern
theosophy, and that the aspects in which it
may be inaccurate, or outdated, are secondary:
its main message and ideas remain a valid
and vigorous teaching in  the present century.
Original title: “A Letter to a Hindu: The
Subjection of India, its Cause and Cure”. The
text is reproduced from the book “Mahatma Gandhi
And Leo Tolstoy Letters”, edited with Introduction
and Notes by B. Srinivasa Murthy;  Long Beach
Publications, California, USA, 1987, 84 pp., pp. 40-61.
(Carlos Cardoso Aveline)
00000000000000000000000000000000000000000000000
1. Introduction by M. K. Gandhi
The letter printed below is a translation of Tolstoy’s letter written in Russian in reply to one from the Editor of “Free Hindustan”.  After having passed from hand to hand, this letter at last came into my possession through a friend who asked me, as one much interested in Tolstoy’s writings, whether I thought it worth publishing.  I at once replied in the affirmative, and told him I should translate it myself into Gujarati and induce others’ to translate and publish it in various Indian vernaculars.
The letter as received by me was a type-written copy.  It was therefore referred to the author, who confirmed it as his and kindly granted me permission to print it.
Click Here to Read
“A Letter to a Hindu” in PDF
000
On the role of the esoteric movement in the ethical awakening of mankind during the 21st century, see the book “The Fire and Light of Theosophical Literature”, by Carlos Cardoso Aveline.